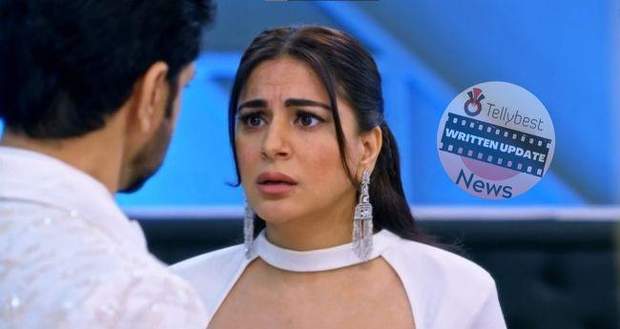 Today's Kundali Bhagya 6th October 2022 episode starts with Arjun asking Preeta to leave Rishabh’s hand as he needs to dance with him to the song that is about to be played.

Anjali takes the hint and goes to request a song.

However, Preeta refuses to let go and drags Rishabh away.

As they are crossing the dance floor, the song begins to play and Preeta is left with no choice but to dance to the music “Tenu Kala Chashma”.

During the dance, Shrishti sees Prithvi roaming the halls and takes Sameer aside to show him Prithvi.

Looking shocked, Shrishti and Sameer capture Prithvi and drag him to the room.

Meanwhile, Kareena makes fun of Mahesh's old age while his mother and Rakhi also joins in.

In the meantime, Rishabh goes to Preeta to ask her what she needs to tell him.

Preeta remembers her concern for Kavya and takes him aside.

At the same time, Sameer pushes Prithvi into the room and asks Prithvi to call the police.

Prithvi dramatises the situation by snatching Shrishti’s phone and tells them that Arjun needs to go to jail instead of him and tells them Arjun is their enemy and is here to backstab him.

Returning Shrishti’s phone, Prithvi tells her to call the police if he is proven wrong.

However, Rishabh counsels Preeta to not worry about Kavya's marks as she will grow responsible with age.

Just then Shrishti comes running to Preeta and Rishabh, looking harassed and telling them something grave.

Arjun is observing Shrishti’s worried face and wonders what could they be talking about when Rishabh comes to him and drags him with him.

In the room, Arjun looks worriedly at Shrishti and Sameer and asks them what is wrong with them.

Arjun is about to confess when Shrishti tells him that he has beaten Prithvi to a pulp and then locked him into a Dikki.

Rishabh also scolds him for dealing with the matter quietly and not taking them in confidence.

Meanwhile, Shrishti shows them Prithvi locked inside the almirah for talking nonsense about Arjun.

Later, Arjun explains to Anjali about his meeting with the Luthras and tells her that tonight they will humiliate Rishabh.

After a while, Prithvi is cursing the Luthras for leaving him tied in the Almirah.

Just then Raja and Vishnu come to the room followed by Sherlyn and frees Prithvi.

Prithvi slaps Vishnu for doubting Sherlyn’s love for him when he tells him about Sherlyn’s encounter with Rishabh.

Later, Prithvi goes to replace the Pendrive to teach Arjun a lesson.

Meanwhile, Preeta is expressing her doubts about Arjun while Rishabh remains confident that Arjun is harmless.

Rakhi sees Preeta and Rishabh discussing Arjun and comes to them and asks Preeta to come with her.