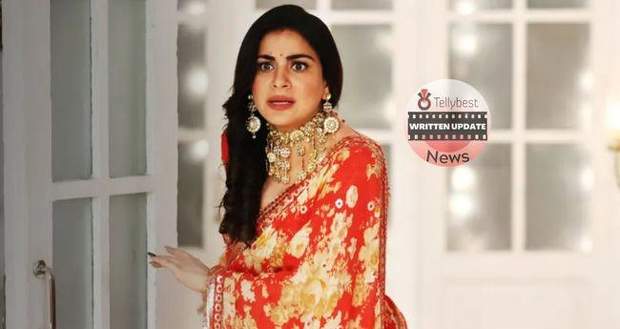 Today's Kundali Bhagya 6th September 2022 episode starts with Arjun looking at Preeta as she mingles with other guests. He also remembers the past when Preeta’s eyes meet Arjun and she feels electrified.

Just then, Preeta sees Kavya coming down the stairs at speed and fears for her safety.

However, Arjun catches Kavya before she can fall and takes her to her room.

Preeta follows them inside and fusses about Kavya.

Kavya and Arjun tease Preeta by telling her that she scolds everyone all the time.

However, Kavya tells Preeta that she wants Arjun to bandage her.

On the other hand, Prithvi is running away from Kritika who has identified him on sight.

Taking refuge in a room, Prithvi wishes for Kritika to go.

However, Kritika bangs on the door asking to open it.

After a while, the door is opened and Prithvi’s friend was there to save the day.

Kritika is shocked to see Prithvi’s friend and asks him who else is in the room.

Prithvi’s friend introduces himself as a soul expert and tells Kritika that it is her soulmate that she has been seeing everywhere.

Kritika looks convinced and goes her way while Prithvi’s friend suggests going away from the room or else Kritika might come back.

Meanwhile, Biji and Janki come bearing Prasad while Kareena taunts her for being late again.

In the meantime, Arjun finishes bandaging Kavya and tells her to hold his hand tightly to get rid of the pain.

Preeta feels like a third wheel while Arjun takes care of Kavya.

Rishabh also comes in and hugs Kavya while asking Arjun his secret of being so good with children.

Rishabh also teases Arjun about having 20 children or something as per his age and asks him if he is in love with someone or not.

On the other hand, Kritika is searching for Prithvi but finds Sherlyn standing in the corridor.

Before Kritika could do anything, Prithvi also sees them and sends his friend to distract Kritika while he himself takes Sherlyn away.

Prithvi’s friend again dupes Kritika but telling her that she is able to see people she loves or hates the most.

Later, Kavya asks Preeta to get something to eat while Arjun introspects Rishabh's questions about his life.