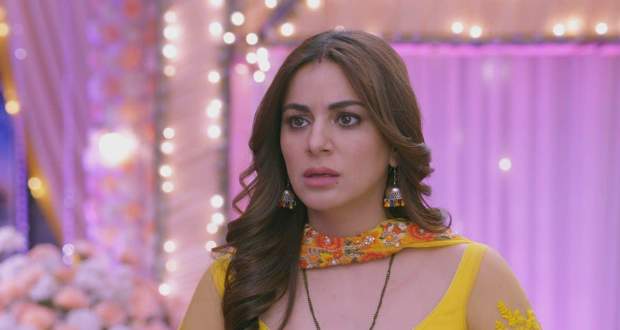 Today's Kundali Bhagya 7 April 2021 episode starts with Mahesh trying to tell everyone who tried to kill him but he fails as he loses his memory temporarily.

The entire family gets worried for Mahesh and tells him to calm down as he feels difficult to breathe.

Mahesh gets restless as he sees Pawan and tries to tell others but nobody understands what he wants to say.

The doctor tells Karan and Preeta that due to the injection he has come out of coma but it may happen that frequently he might keep losing his memory.

Later, Prithvi and Sherlyn get relieved as they do not get exposed. But, Prithvi says that there is still a problem of ACP Vijay Bindra as he is behind him for Akshay's murder case.

Sherlyn tells Prithvi that before ACP Vijay finds the evidence through CCTV camera they should go to the hotel and destroy the evidence.

Meanwhile, Prithvi meets Pawan and he tells him to leave as it's not safe for him to stay at Luthra's house for a long time.

Further, Kritika and Preeta get worried as ACP Vijay calls Karan. Later, they both decide to destroy the CCTV footage from the camera.

In the hotel, Sherlyn tells Prithvi to dress up in a woman's outfit so that no one recognizes him.

Kritika and Preeta also change their look so that no one sees them destroying the footage.

© Copyright tellybest.com, 2020, 2021. All Rights Reserved. Unauthorized use and/or duplication of any material from tellybest.com without written permission is strictly prohibited.
Cached Saved on: Saturday 16th of October 2021 09:29:04 PM