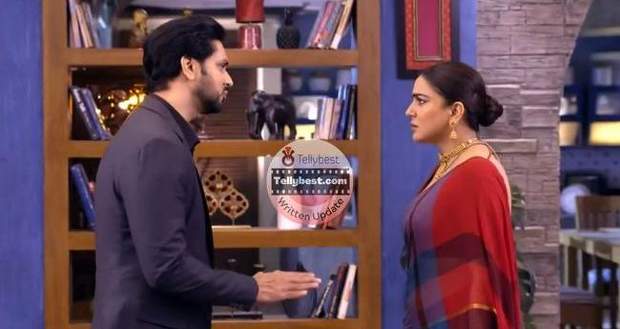 Today's Kundali Bhagya 7th December 2022 episode starts with Malkani asking Anjali to describe in detail what has happened to her.

Hearing Anjali's well-crafted statements Rishabh interrupts her and tells the judge she is lying as he did not ask for tea.

Feeling trapped, he tells the judge that his only fault was to help a girl in need so late at night.

However, the judge tells Rishabh to be quiet and asks Anjali to continue.

Hearing Anjali’s lies, Rishabh once again interrupts her but the judge warns him sternly.

After hearing Anjali’s testimony about Rishabh’s molestation the judge asks her to go back.

Rishabh’s lawyer tells the judge that although the footage and pictures are true yet the story behind it is not.

Mr Malkani also tells the court that Rishabh has done this in jealousy as Anjali works for Arjun Suryavanshi and that Preeta has once offered Anjali a job with Luthras to poach her from Arjun.

However, Preeta denies the allegations and accuses Anjali of lying.

As the judge is about to give a verdict against Rishabh, Arjun’s voice stating Rishabh’s innocence stops him.

The judge tells Arjun to come to the witness box to say whatever he has to say.

Arjun takes the oath to speak the truth and tells the judge that there is a very dirty game being played at the court.

He tells them that Preeta is telling the truth and Rishabh has not done anything wrong as he is not that kind of a man.

He also accuses Anjali of lying.

Anjali is shocked at Arjun’s speech and asks Arjun why is he saying that.

The judge tells Anjali to sit and not interfere in court matters.

He also tells them that he has forgotten about his human side and was blinded by anger.

He also tells the judge that Anjali has done this to take vengeance against Rishabh and Preeta who have restrained him legally to keep away from Kavya.

The judge pronounces Rishabh innocent on the basis of Arjun’s testimony and tells Arjun and Anjali that they will be facing a court case for misleading the court.

Later, Arjun walks away from the court after glaring at Preeta.

After a while, Arjun comes home to find Anjali packed and leaving.

He asks Arjun why did he do what he did at the court and proved her wrong in front of the court.

Arjun hugs Anjali but she jerks herself free from him and tells him that she is going away from this house and his life after his betrayal.

Meanwhile, Luthras welcomes Rishabh at home and performs the aarti to ward off all the evils.

Meanwhile, Arjun tries to stop Anjali but she tells him that she will not listen to any of his excuses.

As Anjali is leaving, Arjun tells her to go and that he knows now that she has done all this for him but he does not appreciate it because he always fights his battles himself.

She does not understand what has made him change his mind in a few minutes alone.

Meanwhile, Rakhi tells them that she knows what has changed Arjun’s mind.

© Copyright tellybest.com, 2022, 2023. All Rights Reserved. Unauthorized use and/or duplication of any material from tellybest.com without written permission is strictly prohibited.
Cached Saved on: Wednesday 25th of January 2023 08:53:02 PMCached Disp on: Monday 6th of February 2023 05:56:24 AM