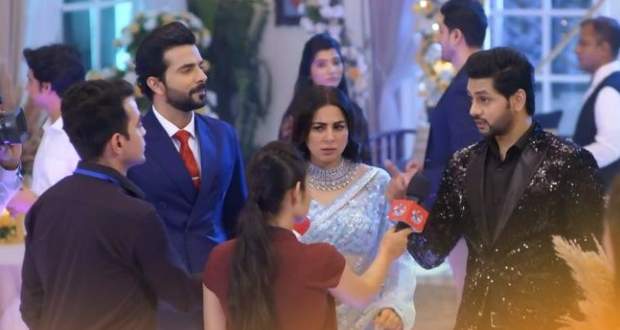 Today's Kundali Bhagya 7th July 2022 episode starts with Rishabh arriving at the party and asking Preeta to go inside.

Preeta asks Rishabh to wait for the whole family while Arjun watches her from the window.

Meanwhile, Anjali comes in to inform Arjun about Preeta’s arrival.

Arjun tells Anjali to be prepared for the night that will bring a morning but its darkness will remain with Preeta.

Downstairs, Preeta is looking anxious while the rest of the people are enjoying the decorations.

Preeta looks at Arjun and sees Karan in him while Arjun stands beside her and stares into Preeta’s eyes while Preeta remembers Karan while looking into his eyes.

Later, media people interviews Rakhi and Mahesh about the auction.

Meanwhile, Arjun/Karan tells Preeta that he had been waiting for her.

Preeta looks at him confusingly when he rectifies his sentence by saying that he was not expecting her to come and that's why he was waiting for her.

Just then, reporters surround Karan asking him about the collection and his reason for this exhibition.

Karan tells them that he is Karan and gives a pause and then says Karan Luthra’s big fan shocking Preeta.

Karan also tells the press that he will be making a big announcement at 9:30 PM and asks the press to remain there.

Meanwhile, Rakhi is feeling Karan around and remembers a time when she use to recognise Karan’s footsteps.

Rakhi searches for Karan while Karan looks at Rakhi tearfully but could not go to her as Karan.

Karan strolls toward Rakhi while she is crying and drops his phone to touch Rakhi’s feet to get her blessing.

Later, Mahesh thanks Karan for making Rakhi smile after a long time.

Just then Kritika is surprised to see Arjun/Karan as his saviour and tells him that she hasn’t expected to see him so soon.

Kritika also introduces Karan to Dadi who misses Karan while talking to Arjun/Karan.

Preeta is feeling anxious and tells Rishabh that she has to leave the party just now.

As she is going away, Karan stops her and hands over the glass of juice.

Preeta refuses the glass but Karan tells her meaningfully that she will have to stay back as the exhibition is about to start.

© Copyright tellybest.com, 2022, 2023. All Rights Reserved. Unauthorized use and/or duplication of any material from tellybest.com without written permission is strictly prohibited.
Cached Saved on: Wednesday 25th of January 2023 06:30:16 PMCached Disp on: Thursday 9th of February 2023 08:19:21 AM