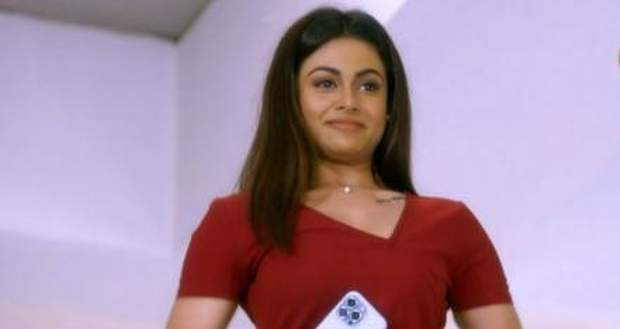 Karan scolds Natasha for accusing Preeta and tells her that he only loves Preeta and Preeta alone while Preeta loves him a lot more than he does.

Natasha insists on her love for him and makes Karan speculate why Preeta was not there to stop his marriage and that she values Rishabh more than him.

Just then Karan sees Preeta and Rishabh’s photo but does not believe them and leaves while asking security to throw Natasha out.

At home, Mahesh tells Karan that everyone has gone to the farmhouse including Preeta and Rishabh.

In his room, Karan is remembering moments with Preeta when they use to romance each other while being together.

Karan picks up the frame with Preeta’s photo and tells her that he is coming soon to be with her.

Just then Sherlyn comes looking for Rishabh and tells Karan that it is Rishabh who is having an affair with Preeta and not she with Prithvi.

Karan tells her to shut up and leaves saying that he does not believe her.

Later Prithvi escapes from the lockup and the police go to look for him.

Meanwhile, Sherlyn calls Natasha to tell her that she has planted a seed of doubt.

Afterwards, Natasha gets a call from Prithvi and tells her about going to Luthra's weekend party.

Meanwhile, Preeta is waiting for Karan to tell him something after midnight.

As soon as Natasha enters, Sameer informs Rishabh of her arrival.

Natasha sees Roxy and takes him away.

Sameer guides her toward a specific room and takes position outside it.

Later, Karan arrives at the party followed by Prithvi.

In the room, Natasha tells Roxy that it is Luthras who are trying to expose them. She also tells him that Preeta must have stolen her marriage certificate and will show it to Karan.

Natasha tells him to go and she will deny all charges and poison Karan’s mind against Preeta.

Natasha shoos Roxy and tries to fight Preeta but Rishabh, Sameer and Shrishti come in and capture Natasha while Roxy falls and becomes unconscious.

They tell Natasha that they have recorded the confession and will show it to Karan and leaves her tied.

© Copyright tellybest.com, 2020, 2021. All Rights Reserved. Unauthorized use and/or duplication of any material from tellybest.com without written permission is strictly prohibited.
Cached Saved on: Sunday 7th of August 2022 10:03:22 AMCached Disp on: Monday 15th of August 2022 08:00:43 AM