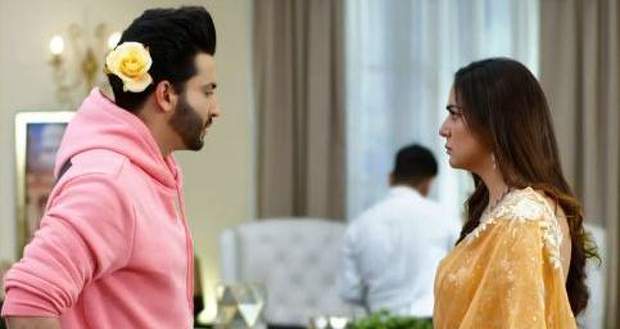 Today's Kundali Bhagya 7th March 2022 episode starts with Shrishti asking Biji to zip her dress. However, Biji fears Shrishti knowing about her taking a drink and leaves without telling her.

While passing through, Sameer hears Shrishti asking to zip her dress and comes to help her and get rebuked in return.

Nagre butters Prithvi and fills his head about being undefeatable.

At the same time, Sherlyn tells Prithvi of Preeta trying to intimidate him by inviting the Judge.

As Karan comes to the party, Natasha corners him and outrageously flirts with him.

Feeling jealous, Preeta tells Natasha of Karan's kiss in an effort to make her jealous.

Karan accuses Preeta of being possessive and jealous while Preeta denies all charges.

Among huge rounds of applauds and birthday wishes, Mahesh comes down with Rakhi and Dadi.

Mahesh approaches Karan and kisses his forehead and hugs him making everyone, except Prithvi, happy.

Afterwards, Mahesh asks for Preeta while Karan goes to fetch her.

Nagre stops Prithvi from going to Mahesh or else he would remember everything and lose control.

Meanwhile, Judge arrives with the lawyer and gives his best wishes to Mahesh.

Prithvi is shocked to see the Judge and questions Nagre about the judge’s presence at the party.

Later, Preeta receives Shrishti’s message about the Judge's arrival and rushes back to the party.