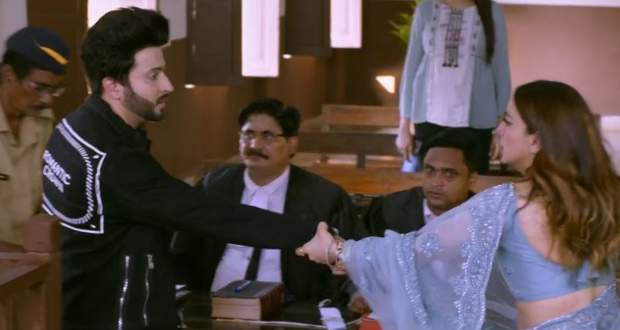 Today's Kundali Bhagya 7 May 2021 episode starts with the lawyer claiming that Preeta's attack killed Akshay and that Preeta and Kritika even tried to delete the CCTV footage.

He further brings up new evidence which proves that Preeta is guilty.

The judge is about to give his verdict but Karan stops and says that he is the one who killed Akshay.

Rakhi, Srishti, Sarla, and Preeta keep saying that Karan is not the murderer and try to stop him from making such a claim but fail.

Karan comes to the witness box and cooks up a story and motive behind killing Akshay.

The judge believes his story and issues an arrest order for him and releases Preeta.

The police take away Karan while Preeta tries to stop them and say that he is innocent while the family members get worried for Karan.

© Copyright tellybest.com, 2020, 2021. All Rights Reserved. Unauthorized use and/or duplication of any material from tellybest.com without written permission is strictly prohibited.
Cached Saved on: Saturday 1st of October 2022 11:47:55 PMCached Disp on: Friday 7th of October 2022 03:28:43 PM