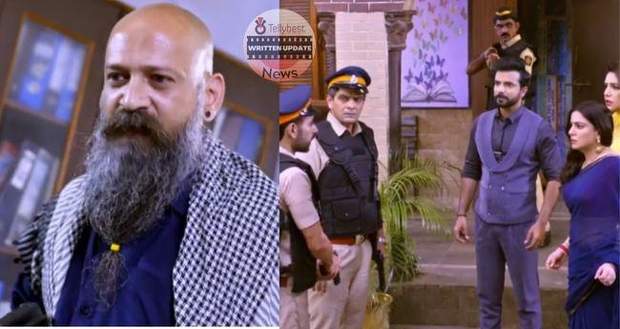 Preeta, Arjun, and Rishab all beg in front of him to let go of Kavya.

However, Raja warns them to not come any closer as he will then blast the bomb.

Arjun tells Raja to leave Kavya and that he will bring him anything he desires.

Raja says he has only one wish which is to see them all humiliated.

Raja then tells Arjun to bow down in front of him and beg for his forgiveness and also demands 50 Lakhs from Arjun.

Arjun sends Anjali to fetch the money when by mistake Raja steps on the remote and the bomb starts ticking.

The police then apprehend Raja and take him away.

Anjali and Sameer are meanwhile stuck in traffic.

On the other hand, Sherlyn and Prithvi talk about having a soft corner for both Rishab and Preeta respectively.

Prithvi asks Sherlyn why is she so bothered about Rishabh.

Sherlyn says that she might have loved somebody else for a moment but she will always stay loyal to Prithvi.

Sherlyn tries to win Prithvi's trust by saying that she has always loved him.

Meanwhile, at the school, Arjun consoles Kavya saying that she will not be harmed as her parents and family are here.

Meanwhile, Sameer and Anjali reach Arjun's house to search for the money.

While ransacking the cupboard, Sameer sees various pictures of Preeta and the Luthras.

At the school, the bomb squad team arrive and starts working.

Sherlyn and Prithvi also arrive at the school and watch from a distance as the bomb squad does their job.

Prithvi tells Sherlyn to enjoy how while it lasts.

Suddenly the bomb squad asks Rishabh to cut the wires as the police isn't trained for it.

Preeta implores the bomb squad to let her hold Kavya's hand so she isn't so afraid.

Rishab starts to diffuse the bomb and Preeta motivates him in the meantime.

Suddenly, one of the terrorists shoots the captain of the bomb squad.

The captain is very badly injured and asks Arjun for help to cut the wire.

Preeta refuses Arjun's help to cut the wire, as she feels her daughter is in greater danger with Arjun's help.

Arjun asks Preeta if her ego and anger are greater than her child's life.

Preeta says she is worried about Kavya and hence won't let him help her.

© Copyright tellybest.com, 2022, 2023. All Rights Reserved. Unauthorized use and/or duplication of any material from tellybest.com without written permission is strictly prohibited.
Cached Saved on: Monday 21st of November 2022 05:31:53 AMCached Disp on: Monday 5th of December 2022 01:07:49 AM