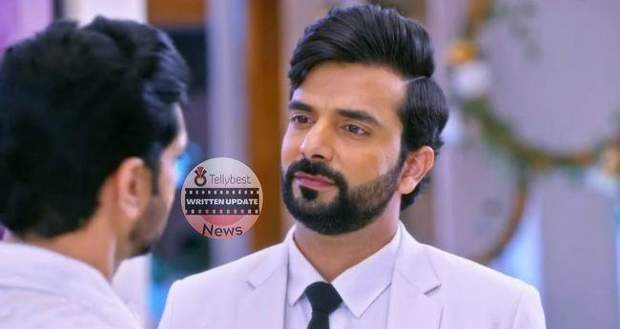 Today's Kundali Bhagya 7th October 2022 episode starts with Prithvi thinking about his conversation with Arjun and how he sent him to jail.

Just then Sherlyn comes to Prithvi and tells him to go get them.

Anjali also suggests thinking again as it will affect the whole of Luthra's clan.

However, Arjun tells Anjali that he cannot go back on his plan now as he has taken great pain to convince himself.

Sherlyn is shocked to hear their conversation and goes to tell Prithvi about it.

Later, Prithvi gets curious about the Pendrive and wants to get his hand on it.

Elsewhere, Rishabh collides with the door and gets hurt while Arjun scolds him for walking without seeing it.

Rishabh and Arjun’s conversation turns towards Karan and Arjun asks Rishabh how can he forget Karan and not see Karan’s pain.

Rishabh loses his temper and tells Arjun to not cross his limits, as he ignores a lot of his weird talks only because he resembles Karan.

He also requests Arjun to not say a word against Karan as he is his life.

Arjun walks out in anger while Sameer follows him.

Meanwhile, Rakhi questions Preeta’s dislike for Arjun and tells her that she knows Arjun more than her and that she can feel his goodness inside.

Just then Arjun comes to Rakhi and asks her what is troubling her.

Rakhi tries to ignore the question but Arjun understands that Preeta must have said something against him that upsets Rakhi.

Arjun becomes sarcastic and tells Preeta to always come to him and tell him on the face whatever issues she has with him and not upset Rakhi.

Preeta also returns his sarcasm and tells him to not interfere in their family matters and as she is with her mother and she will take care of her.

After a while, Sherlyn and Prithvi find Arjun’s Pendrive in the laptop and are about to see it when Shrishti’s voice forces them to hide.

Meanwhile, Shrishti is shocked to see the Pendrive missing from the laptop and goes to get the backup.

After a while, Sherlyn and Prithvi pick the Pendrive and go to Rishabh’s study to watch the video.

Meanwhile, Sameer comes to Arjun and asks him what is troubling him and why is he acting weird.

On hearing that Sameer loves Rishabh, Arjun gets angry and questions Sameer for not loving Karan enough to care for him.

Sameer gets upset and begins to cry telling Arjun that if he had been there he wouldn’t have let Karan die.

Meanwhile, Rishabh’s colleague informs Rishabh about the rumours in the market about the collaboration between Suryavanshis and Luthra.

However, Rishabh pays no heed to him and tells him that he has complete faith in Arjun.