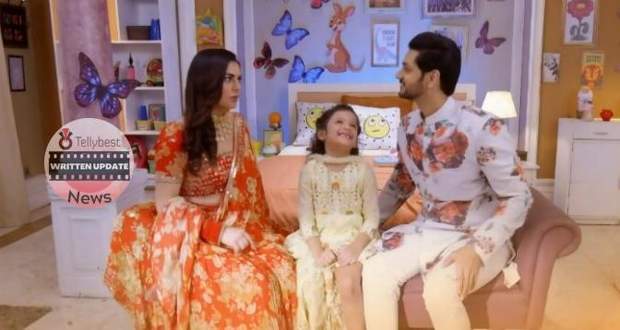 However, Prithvi’s friend tells her that she wouldn’t have been roaming the hall texting someone if she wants to hide.

She agrees with him and tells him that she is going to take Ganpati's blessings to calm herself.

Sherlyn tries to attack Kritika from behind when Prithvi stops her and tells her not to create problems today.

Meanwhile, Rakhi compares Arjun and Karan's behaviour with her and comes to the conclusion that Arjun is Karan.

However, he tells her that despite finding similarities, they have to face reality.

Rakhi does not listen to him and goes away repeating that Arjun is Karan.

Shrishti who has been hearing Rakhi’s conversation goes after her.

Meanwhile, Sherlyn explains her rowdy behaviour to Prithvi who is responsible for taking away her classiness from her after she was kicked out of Luthra's mansion.

Seeing Sherlyn overwhelmed, Prithvi apologises to her and tells her that within fifteen days he will turn their fortune and goes to find Arjun.

Meanwhile, Rishabh asks Arjun about his family and his roots but Anjali comes to his rescue and takes Rishabh away to discuss business matters.

In the meantime, Mahesh comes after Rakhi and tells her to calm down but Rakhi is angry because Mahesh is telling Rakhi to be realistic.

Mahesh asks Rakhi if Arjun would have been Karan would he not come and told them that at the very first moment?

What reasons does he have for keeping the truth to himself?

Meanwhile, Arjun is talking to Kavya when Preeta comes in and tells Arjun not to interfere between mother and daughter.

Preeta is equally surprised to hear that Arjun and Kavya have become friends and tells Kavya that she will not give her favourite food to her if he calls Arjun her friend.

However, Kavya charms Preeta and takes away apples from Preeta’s hand.

Later, Kavya tells Arjun that she does not share her apple with anyone making Preeta smile.

On being called Baby Doll by Kavya, Preeta’s face falls thinking of Karan and she leaves the room.

After a while, Kavya is playing with her ball when Anjali stops it but Kavya takes it back rudely saying to never touch her ball ever again.