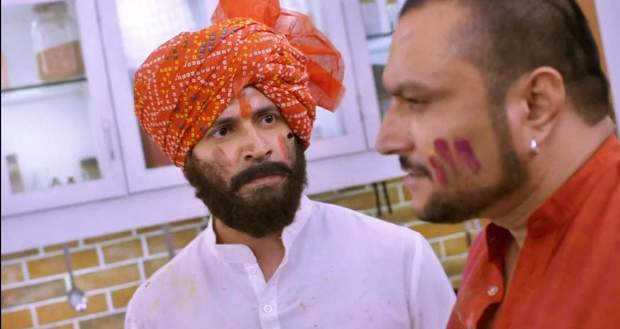 Seeing the intoxicated state of Preeta, Shelyn tells her that today Preeta will not be able to save Karan.

Sherlyn also tells Preeta, her reason for marrying Rishabh and tells her that she loves Prithvi, who is not with her on this day because of her.

Sherlyn tells Preeta that Natasha and Karan will enjoy the wedding night which angers Preeta who slaps her.

After a while, Preeta tells Sherlyn that Karan only belongs with her but Sherlyn challenges her and leaves the room after locking her inside.

In the hall, Luthra’s are out of control being intoxicated, while Kritika tries to control them.

Shrishti spots Nagre and PM leaving and resolves to call the police to get them arrested.

Meanwhile, Natasha comes to Sameer telling him that Shrishti is calling her.

Afterwards, Natasha goes to Karan and pretends to take him to Preeta.

As Sherlyn and Natasha are assisting Karan, he falls to the ground.

Later, Nagre and PM collide with Karan and PM asks him for an autograph. They start to fool around each other while Sherlyn and Natasha watch over them.

After a while, Karan comes near Preeta’s room and starts to dance to phone music which alerts Preeta and she calls him.

Karan goes to Preeta who tells her that Sherlyn has locked her and tells her to open the door.

Meanwhile, Sherlyn and Natasha are trying to control Nagre and PM while forgetting about Karan.

As Karan opens the door, Preeta begins to cry that Sherlyn will again lock her.

However, Karan locks the door from inside telling Preeta now Sherlyn cannot lock her now.

Afterwards, they both lay on the bed feeling tired but happy.