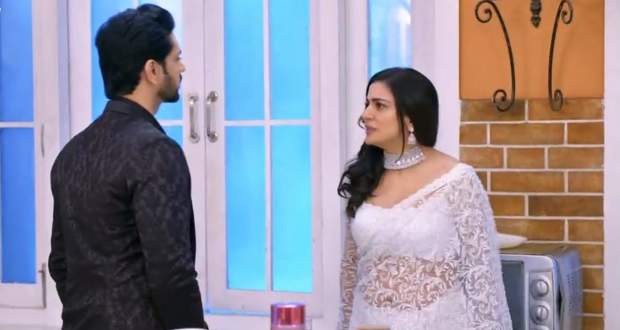 Today's Kundali Bhagya 8th August 2022 episode starts with Prithvi crashing into Preeta while disguising himself as Sardarji while Preeta runs away crying after a quick apology.

However, Shristi insults Prithvi and goes from there to find Preeta.

Prithvi starts questioning who's the good person who made Preeta cry.

In Preeta's Room, Shrishti confronts Preeta for being troubled whenever Arjun is near her.

Preeta tells Shristi about feeling Karan's presence whenever Arjun is near and recalls Karan calling her nicknames.

Meanwhile, Arjun is listening to their conversation from the room's window and accuses Preeta of killing Karan.

At the same time, Anjali finds Arjun standing in front of Preeta's room and takes him to his room.

Anjali confronts Arjun for still loving Preeta but furious Arjun expresses his hatred towards her.

Anjali accuses Arjun of dancing with Preeta while showing feelings of his love for Preeta.

On the other hand, Shristi tells Preeta of feeling Karan's presence when she sees Arjun sometimes.

At the same time, Dida interrupts Shrishti and tells her to go out as she wants to talk with Preeta alone.

Meanwhile, Dida teases Shrishti that she had a breakup with her boyfriend so she wants to talk to Preeta about it while Shristi goes out flabbergasted.

Dida asks the reason for Preeta's sadness while Preeta lays in Dida's lap and starts to cry her heart out.

Dida consoles Preeta and tells her to cry alone without anyone knowing but not let Rishabh feel worthless as a husband.

Later on, Preeta offers her hand to Rishabh asking for dance while Rishabh's happiness has no bounds.

Both Rishabh and Preeta start to dance like two bodies and one soul.

However, seeing the couple dance, Arjun gets agitated and starts to drink alcohol while feeling hurt.

On the other hand, Prithvi confronts Raja, a goon hired to mess up Rishabh's party and joins hands with them and becomes the leader of the group.

Meanwhile, Bani meets his childhood friend Surekha and her granddaughter Sonia and introduces them to her family.

Meanwhile, Surekha and Sonia convey their wish of watching Preeta and Rishabh doing the varnamala ceremony as they were not able to attend their wedding.

At the same time, Shristi gathers everyone while Preeta and Rishabh hold the varnamala while Arjun's eyes get red with anger.