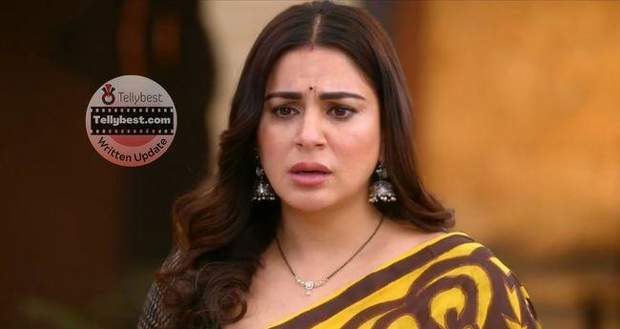 Today's Kundali Bhagya 8th December 2022 episode starts with Arjun asking Anjali her reason for interfering in his business when Anjali tells him that she did that because without Preeta he can win over anyone.

She tells him that whatever he did today is because of Preeta only.

However, Arjun tells her that his decision to save Rishabh has nothing to do with Preeta but he did it for himself to attack them from the front.

He also tells him about Preeta calling him a coward who is using Anjali to get what he wants and he cannot tolerate being called that.

Arjun also convinces Anjali to believe in him and be by his side.

On the other hand, Rakhi tells her family that Arjun has done this for her because she has asked him to do that.

Rishabh and Preeta tell Rakhi that she should not have asked Arjun to do that.

However, Rakhi tells them to stop being arrogant.

Rakhi is sure that Arjun is not a bad person but he seems nice like Karan.

Meanwhile, Kareena does not approve of Rakhi’s perspective of giving Arjun another chance with them.

Later, Rishabh tells her that a mother can never be wrong and if she wants him to go to Arjun and forgive him then he will do that.

As Rishabh tells Preeta that he is going to Arjun’s place she offers to go with him.

Meanwhile, Arjun is imbibing alcohol in excess and thinking about Preeta and all the happenings in the past when his staff tells him that Rishabh is here to meet him.

After a while, Arjun comes to the living room wobbling on his feet and asks their reasons for coming there.

Rishabh tells him that he is here to thank him at Rakhi’s behest as she wants them to live like brothers because she loves him like Karan.

However, Arjun tells them that he always does everything for himself.

Pointing at Preeta, he tells him that he is a coward that hides behind Anjali’s back, and is happy that she has thrown him out of Luthra and Kavya's life.

He tells Rishabh that he did everything because of Preeta as she is very important to him.

He tells Rishabh not to get angry as he freed him so that Preeta cannot whine about being alone when he attacks them.

Arjun wants his enemies to be his equals and tells them that he will take revenge on them for everything.

Rishabh and Preeta look at him in bewilderment and tells him that they have not done anything wrong.

Meanwhile, Arjun tells them that he will take Karan’s revenge on him.

Rishabh is shocked to hear Karan’s name and requests him not to involve Karan in his matters.

Meanwhile, Mahesh asks Rakhi if she is sure that Arjun and Rishabh to be friends.

Hearing Mahesh’s doubts, Rakhi explains to him that Arjun is good at heart and understands things when explained calmly.

Meanwhile, Mahesh gets worried for Rakhi whose heart is melting for Arjun day by day.

Later, Arjun moves towards Preeta and tells her that he will take Karan’s revenge on her and will expose her facade of marriage to everyone.

Hearing Arjun talks about marrying Preeta, Rishabh gets furious and slaps him hard and warns him to never take Preeta’s name.

© Copyright tellybest.com, 2022, 2023. All Rights Reserved. Unauthorized use and/or duplication of any material from tellybest.com without written permission is strictly prohibited.
Cached Saved on: Wednesday 25th of January 2023 01:50:13 PMCached Disp on: Wednesday 1st of February 2023 10:15:52 PM