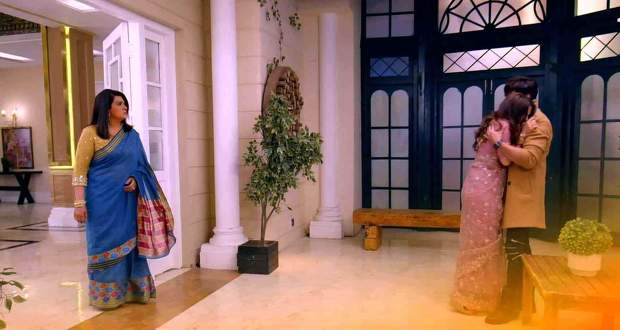 Today's Kundali Bhagya 8 February 2021 episode starts with Kareena throwing Preeta out of the house till marriage ends but Karan catches hold of Preeta.

Kareena tells Karan about Preeta taking everyone to the hotel to prove Akshay guilty and tells hotel staff to open the washroom to see if some girl is there but no one was there and Sherlyn backs Kareena.

But Karan says that she is Preeta Karan Luthra, she is his better half, her dignity is his dignity. He will not let anyone throw Preeta out of the house, she will remain in the Luthra house only.

Karan and Preeta go to the room, Preeta feels nice Karan supporting her and Karan tells Preeta to get ready for the function.

The driver gives Karan gifts that he has bought for Preeta but Karan hides gifts to give her later on when her mood will settle down.

Guest arrive for the function for Kritika's marriage and seeing Rakhi welcoming Sarla, Kareena thinks that she doesn’t know why but her family is influenced by Arora’s.

Sarla talks to Akshay’s mother that Akshay is wrong, she is her mother and it’s her duty to bring him on the right path but she doesn’t pay heed to her advice.

Sala asks Preeta if Karan is supporting her or not, Preeta replies yes but not completely, Sameer and Srishti are with her all the time whenever she needs.

Sarla tells Preeta that a girl can fight any big battle if her husband supports her.

Srishti and Sameer arrive at Luthra's house with proof against Akshay.

The priest tells Akshay to get his sister for the Gathbandhan ceremony to which Akshay tells Preeta that she is most appropriate to do this ceremony.

© Copyright tellybest.com, 2020, 2021. All Rights Reserved. Unauthorized use and/or duplication of any material from tellybest.com without written permission is strictly prohibited.
Cached Saved on: Tuesday 27th of July 2021 11:00:22 PMCached Disp on: Wednesday 4th of August 2021 06:23:25 AM