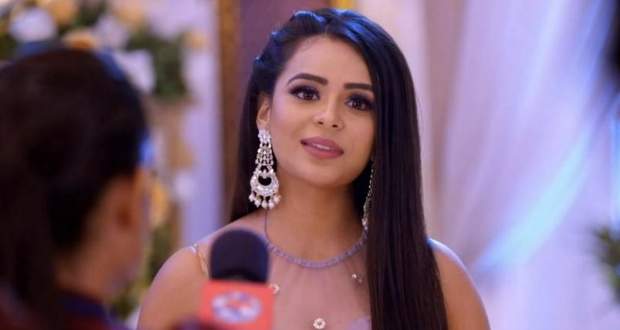 Today's Kundali Bhagya 8th July 2022 episode starts with Karan telling Preeta that her being at the party is very important as she is Karan’s wife.

He asks Rishabh to convince Preeta to stay.

After a while, Karan comes on stage and gets emotional at seeing his family.

Karan introduces Anjali as his secretary and reveals his collections and says that among these his favourite and most popular is Karan’s bat.

On being asked, he says that the red background represents the colour of Karan’s blood.

Karan talks about Karan’s death and says that his death has skyrocketed the prices of his stuff.

Karan asks Rishabh to not betray him and wait till 9:30.

Shrishti comes to Preeta while she is feeling dizzy.

Just then, Karan comes to her with a glass of water while Preeta asks him why is dressed like Karan.

Arjun tells her that he always thought that Karan dresses like him.

Preeta gets angry at Karan’s suggestion while Shrishti tries to cool her saying that he is only teasing her.

Karan asks Preeta what else she does besides showing attitude.

Shrishti tells Karan that she is a doctor while Karan tells her that doctor does not take life.

After a while, Karan overhears Rishabh’s conversation with business associates and intervenes calling him a double-faced person.

Rishabh asks him if he has angered or hurt him somehow due to which he has made such an ugly declaration about him to people.

Karan retracts his statement saying that all he meant to say was that he kills people with his sweetness and asked to be friends again.

Later, Karan recognises the watch he had once given to Rishabh while Rishabh tells him that he keeps it with him all the time to feel Karan beside him.

Rishabh also tells him that Karan has told him that his good time has started after wearing this watch.

After a while, Shrishti takes Anjali to task for smiling at Sameer while Anjali tells her that she does not follow married men.

Karan sees Preeta alone and is about to go to her when he loses her in the crowd. He searches for her while Preeta walks toward Rishabh.

Preeta's sandal twists and she is about to fall when Karan catches her.

Preeta thanks Rishabh with closed eyes but Karan tells her that he is not Rishabh but Karan.

© Copyright tellybest.com, 2022, 2023. All Rights Reserved. Unauthorized use and/or duplication of any material from tellybest.com without written permission is strictly prohibited.
Cached Saved on: Monday 21st of November 2022 03:19:43 AMCached Disp on: Thursday 8th of December 2022 02:01:45 AM