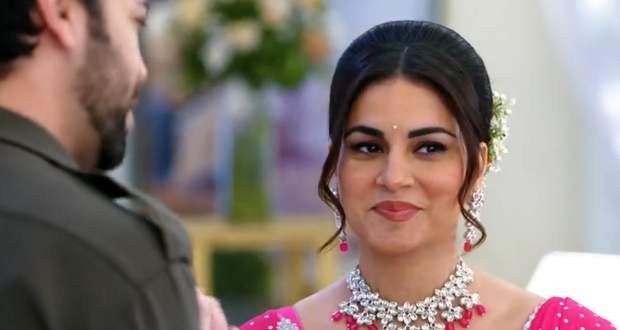 Stopping Preeta, Prithvi asks about her plan while Preeta tells Prithvi to relax as he will find out everything in time.

Soon dance and music begin, where Preeta and Shrishti sing a song whose lyrics focus solely on Prithvi.

Later, Prithvi thrashes his room and swallows some mind-affecting pills.

Sherlyn tries to calm him but in his anger, he has lost reason and goes to Preeta to question her motive.

Rejoining the party, Prithvi also dances to a song while returning Preeta's threats.

After a while, someone releases smoke at the party which Prithvi uses to kidnap Preeta to his room.

Without being intimidated, Preeta scolds Prithvi for behaving non-sensically and mocks him for his restlessness.

Instigated by Preeta, Prithvi questions her about her motives in bringing Judge and lawyer in the Party.

Between his mirth, Prithvi points Preeta's mistakes in underestimating him and tells her the disadvantages of proving Mahesh normal.

Prithvi also tries to manipulate Preeta to change her mind about Mahesh, as Luthra's family will tell tales to Mahesh against Preeta and might send her away again.

Having an insight into Preeta's Plan, Prithvi suspects Preeta’s behaviour as nothing but an act from the beginning to target him and not Luthra's.

In an attempt to convince all, Sherlyn calls the smoke effect, part of Preeta's act but Karan remains unconvinced and goes to find her.