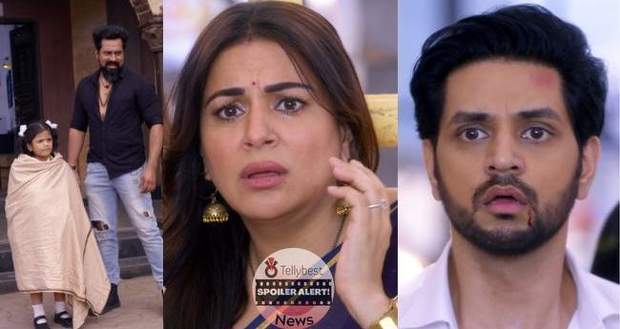 Today's Kundali Bhagya 8th November 2022 episode starts with Arjun telling the police and the family members to let him cut the wires as he will do it calmly.

Rakhi tells Preeta to not get emotional and let Arjun cut the wires after which Preeta agrees and stands up.

Satish tells Arjun to cut the yellow wires while Arjun calms Kavya and goes to cut the wire.

However, Satish stops him just then and tells Arjun to cut the red wires as he got confused seeing the wires tangled up.

Further, Arjun scolds Satish and tells him to be more sure after which he cuts the red wire.

Everyone gets relieved as the bomb didn't blast but Srishti brings it to everyone's notice that the timer is still on now.

Satish reveals that they need to cut the third wire and tells Arjun to cut the purple wire.

Arjun still stands in agony and cuts the purple wire while the timer still doesn't stop.

The terrorist laughs as he reveals that the bomb cannot be diffused and that they all will die with the kid.

Afterward, Arjun and Rishabh hurridly remove the jacket while Arjun fights with Preeta to take the jacket.

Preeta blames Arjun for the situation and tells him to go and throw away the jacket.

Arjun states that he will save everyone and rushes away with the jacket.

Further, the Luthra family celebrates the success of the rescue mission while Anjali thinks that Arjun really cares about Kavya and the whole Luthra family.

Meanwhile, Karan throws the jacket into the river just before it blasts and saves everyone.

Arjun falls to the floor as he recalls his moments with Kavya and how he saw Karan's name on Kavya's birth certificate.

Later, the Luthra family returns to home and Preeta takes Kavya to her room while Rishabh takes a glass of water and goes after her.

Rakhi says that it feels as if they are made for each other while thanking god for saving their family.

Rishabh goes to Preeta and calms her while telling her to have a sip of the water.

Preeta tells Rishabh that she wants to go to the police station and he agrees to take her without asking any questions.

Rishabh calls the police officer and asks him if he is still at the police station and informs them that they are coming.

Later, at the police station, Preeta starts beating up Raja the goon for trying to kill her daughter.

However, the goon reveals that he kidnapped Kavya only to take revenge on Arjun as he had not been given money.

Preeta further goes to the police officer and informs him that she wants to file a case against him.

Meanwhile, Arjun is thinking about Kavya while Anjali comes there and tries to make him drink water while calming him.

Arjun tells Anjali that he needs to see Kavya and Anjali agrees seeing his situation.

On the other hand, Rishabh tries to talk to Preeta while she keeps complaining about Arjun and states that she will not let him come anywhere near Kavya.

© Copyright tellybest.com, 2022, 2023. All Rights Reserved. Unauthorized use and/or duplication of any material from tellybest.com without written permission is strictly prohibited.
Cached Saved on: Monday 21st of November 2022 12:51:02 AMCached Disp on: Thursday 1st of December 2022 01:16:11 AM