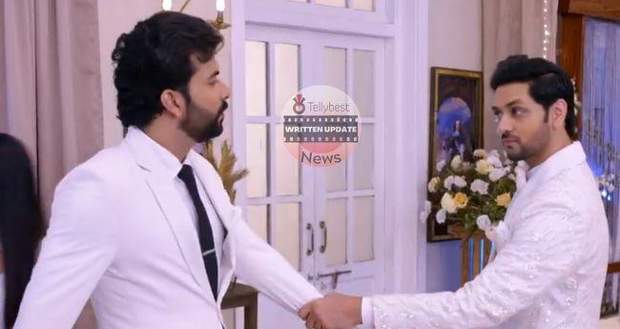 Prithvi and Sherlyn watch the video and call it garbage and making no sense.

However, Sherlyn is not ready to give up and analysed that Arjun is trying to spoil Rishabh’s reputation so that he can get to Preeta and prove that Rishabh has killed Karan.

Prithvi also agrees with Sherlyn and recalls Arjun’s violent behaviour whenever Preeta’s name is taken in front of him.

Meanwhile, Arjun tells Sameer to go and mingle with guests as he is feeling too emotional.

Arjun longs to tell Sameer that he is Karan but feels helpless.

Just then Preeta comes to Arjun and asks him what is he thinking of doing now.

Arjun tells Preeta to not think too much about him as she will not be able to understand him.

However, Preeta tells him that her resentment for him began with their first meeting and strengthened when they met at the party.

Arjun tells Preeta to not accumulate too much negativity about him in her heart else she will be in trouble.

At that moment, Shrishti interrupts them and calls them downstairs for the collaboration presentation.

As Preeta passes him by when her hand touched Arjun’s hand.

Arjun and Preeta are lost in the sensation of each other's touch.

After a while, Shrishti is ready with the presentation and the logo when Arjun asks to say something.

Anjali is not happy with the change but Arjun carries on and tells everyone that Preeta Luthra who is the Laxmi of the house should do the honours of the reveal.

Everyone agrees with Arjun while Preeta looks suspiciously at Arjun whose eyes speak a different language than what he is speaking.

As Preeta plays the video, the logo of collaboration is seen on the screen.

Just then, Prithvi makes an appearance shocking everyone.

On being threatened, Prithvi angrily tells Arjun that he is here to expose him.

Rishabh tells Prithvi to leave without saying a word.

However, Prithvi tells him that he is here with the proof.

He tells Rishabh that Arjun is the one who has given the contract for his murder.

Arjun denies Prithvi's claim and calls him a liar.

Prithvi shows the Video of Arjun and the goon's conversation at the jail.

Anjali calls the video a fake and tells them that Arjun has been morphed in the video.

Prithvi mocks Anjali and calls the goons who tell the Luthras that Arjun has given them a contract to kill Rishabh.

Everyone is shocked at Prithvi's revelation and looks enquiringly at Arjun.