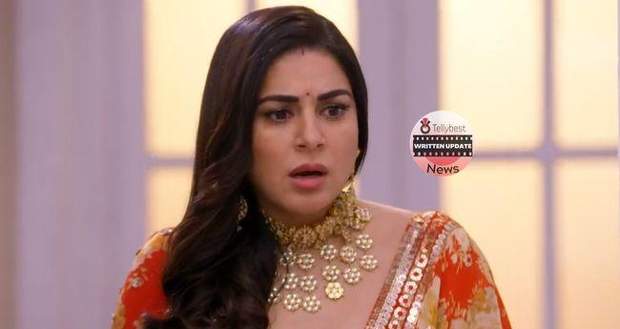 Later, she tries to apologise but Arjun behaves rudely to Anjali reminding Anjali of Kavya.

Just then Biji comes to them and tells Arjun and Anjali that Kavya is Karan’s copy in everything.

She was about to tell Arjun that Kavya is Karan’s daughter but stops herself in time.

Meanwhile, Prithvi is feeling bad for Sherlyn and decides to be loyal to Sherlyn.

Just then, he sees Anjali coming toward him and tells her that he knows Arjun’s secret about trying to kill Rishabh.

Cornering her, he tells her to go and find Arjun else he will expose Arjun to the Luthras. He saves his number on Anjali’s mobile and tells her to call him as soon as she finds him.

Meanwhile, Shrishti is lost in her thoughts when Preeta sees her and asks her what is bothering her.

Shrishti tells Preeta that Rakhi thinks Arjun is Karan because Arjun made tea for Rakhi and also he knew her phone was under the pillow.

Preeta gets angry and tells Shrishti to be quiet as she does not want to hear all these nonsense talk about Arjun.

Meanwhile, Arjun is recalling Biji’s talk about Kavya and becomes suspicious that something is not as it seems.

He starts to search Preeta’s room for Kavya’s certificate but Sameer comes and takes him to celebrate.

In the meantime, Preeta takes out her anger on Rishabh for working on a veneration day.

Rishabh is gobsmacked at Preeta’s reaction and comes after her to reason with her and start an innocent argument.

Arjun and Sameer come to them and Arjun asks Rishabh what has gone wrong.

Rishabh tells him it's nothing while Abhishek, Rishabh's secretary advises them to never interfere between husband and wife.

Arjun taunts Preeta saying that it's true to never come between two people as who knows what's in the heart of another person.

Later, Arjun is talking to Biji when Preeta comes to them and tells Arjun to behave maturely.

However, Arjun tells her that he is more mature than her and mocks her with Biji and Janki aunty.

Preeta stamps her foot and goes away while Sameer goes to call Arjun for dance.

Preeta does not want to involve Arjun but Rakhi intervenes and tells Sameer to call Arjun.

Preeta and Rishabh begin the couple dance, Arjun also asks Anjali to dance with him but his eyes remain glued to Preeta, and Anjali leaves the dance floor.

Later, others also join in and they change partners bringing Preeta into Arjun’s arms.

After a while, Preeta stamps on Arjun’s foot making Arjun shout in pain.