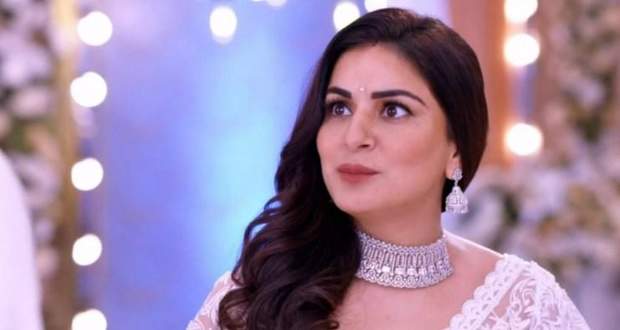 The family members clap and celebrate the couple while Arjun gulps down alcohol directly from the bottle and rushes away with Anjali following behind him.

Anjali closes the door and asks Arjun why he's feeling so down while Arjun bangs his fist on the pillar and tells her that he loves Preeta and would die if he loses that feeling.

He is asked why his feelings changed from a while back and he tells Anjali that he speaks whatever his mind desires when he's drunk.

However, Anjali tries to remind him that Preeta is the one who killed him but Arjun stays adamant that he will reveal the truth about him being Karan to Preeta.

Not being able to handle Arjun in this condition, Anjali tells him that she's leaving and exits while Arjun goes to Preeta's room recalling his memories with Preeta.

Meanwhile, Preeta comes out of the washroom and questions him why he's there seeing while Arjun suddenly holds Preeta by her face and tells her to marry him.

A shocked Preeta asks him if he's out of his mind and tells him to respect the relationship they have as she is Rishabh's wife.

Arjun however doesn't listen to her and starts the mantra's on his phone while pulling down the curtains to light a fire to them and make holy fire.

Before anything can happen, Preeta pushes Arjun when Anjali comes and saves him from falling.

Arjun keeps on talking about marriage while Anjali puts him down and tells him that she'll marry him.

Preeta gets angry at Anjali and berates her and Arjun while Anjali reasons that it is all because of Arjun being drunk.

Anjali further tries to justify it by saying that Arjun proposed to even her but Preeta just shouts at her and leaves from there.

Elsewhere, Sherlyn (dressed as Sardarji) bumps into Rishabh and feels scared while Rishabh just looks for Preeta and leaves.

Back in the room, Anjali makes Arjun drink black coffee to sober him up and scolds him for being in Preeta's room while he argues that it is his room.

Meanwhile, at the party, Mahesh and Rakhi jokingly argue over sweets while Rishabh and Preeta look at them and smile joyfully.

Preeta is about to tell Rishabh about Arjun but gets interrupted by Biji who complains about Bani.

Anjali tries to calm Arjun who finally passes out on the bed as she wonders how to stop him from forgetting his revenge on the Luthra family.

© Copyright tellybest.com, 2022, 2023. All Rights Reserved. Unauthorized use and/or duplication of any material from tellybest.com without written permission is strictly prohibited.
Cached Saved on: Monday 21st of November 2022 08:49:58 AMCached Disp on: Friday 9th of December 2022 06:30:11 PM