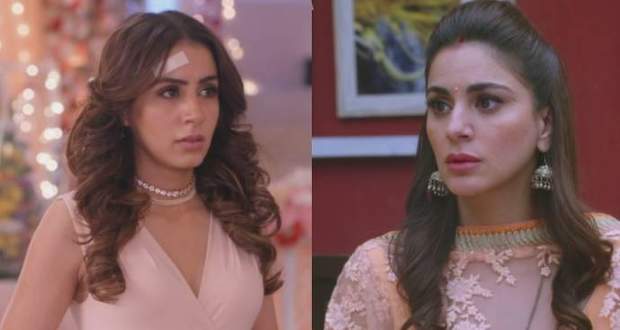 Today's Kundali Bhagya 9 December 2020 episode starts with Preeta secretly giving the black inked towel to Mahira. She then hides the sweet box in the drawer to hide it from everyone.

Preeta gets a call from Srishti and they both plan to prove Sarla innocent in the fake case. Sherlyn arrives there and rushes to see Mahira if she is fine. Sherlyn screams on finding Mahira’s face painted black in colour.

Mahira angrily gets out of her room and bumps into Karan. He asks her to wash her face otherwise she would give a heart attack to anyone.

Further, Karan tries to make Preeta jealous by talking about his past relationships. Karan tells Preeta about Mahira’s black face, while Mahira tries to clean her face in a furious mood.

She decides to take revenge from Preeta. Elsewhere, Preeta informs Karan that she has painted Mahira’s face black.

They both start playing together, while Mahira overhears their conversation. She runs from there and bumps into the servant who completed her Karvachauth fast.

Srishti arrives at the Luthra house and starts their plan to expose Mahira and Sherlyn.

Everyone gets shocked to see Ramona and the priest at the Luthra house. They tell the Luthra family that Rakhi invited them.

Srishti recalls that she called everyone in Rakhi’s voice. On the other hand, Sarla also arrives at the Luthra house for the Puja.

© Copyright tellybest.com, 2020, 2021. All Rights Reserved. Unauthorized use and/or duplication of any material from tellybest.com without written permission is strictly prohibited.
Cached Saved on: Wednesday 28th of July 2021 08:06:55 AMCached Disp on: Sunday 1st of August 2021 07:32:53 AM