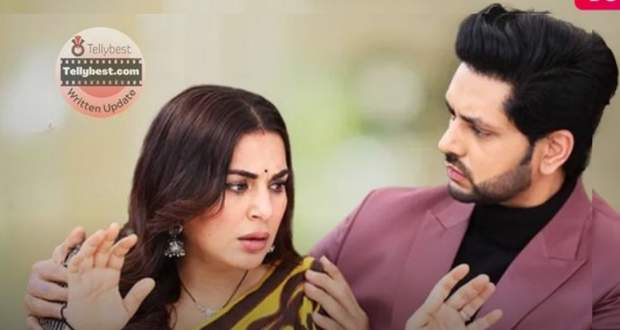 Today's Kundali Bhagya 9th December 2022 episode starts with Arjun telling Rishab that he is lucky and that is why he gets saved every time but this time what they did to Karan will not go unpunished.

Rishabh tells him to shut up else he will forget his limits if he continues to talk nonsense about Preeta and Karan.

Arjun tells Preeta to listen very carefully that in the next seven days he will take away everything from everywhere and the world will know their truth in these seven days and then he will marry Preeta.

Rishabh holds his collar in anger but Arjun continues to speak nonsense.

Later Rishabh tells Snigdha's Dadi to tell him in the morning what he has said and done and that it is unforgivable.

Meanwhile, Anjali makes Arjun sit and pours water on him to ask why he talked about Karan.

In the meantime, Preeta is thinking about Arjun’s words and asks Rishabh why Arjun took Karan’s name and he has been doing it for so long.

Preeta tells him that she does not understand what he means by taking Karan’s revenge.

She tells him all that he has said and that he has ruined everything by telling them the truth.

Meanwhile, Preeta tells Rishabh that whenever Arjun takes Karan’s name she feels more hatred towards him.

Elsewhere, Anjali tells him that he will have to go to Rishabh tomorrow and make any story to convince him.

Meanwhile, Rishabh tells Preeta that he is with her and will never let Arjun win as he is in the wrong.

The next morning, Dadi asks Kritika to prepare a veneration plate for her temple visit and is looking for Mahesh.

Later, Mahesh asks about Rishabh so they can find out about what happened with Arjun the previous night.

Just then Rishabh comes down while Rakhi asks him what happened at Arjun the previous night.

Before Preeta and Rishabh can answer, Arjun comes there himself.

Arjun recalls Anjali’s advice to lie and attack them from behind so that they cannot defend themself.

Rakhi assumes that everything is fine now as Arjun has come there but Arjun denies her assumption.

Just then Preeta interrupts him and tells him that he has come to apologise for what he has said but they will not forgive him for his misbehaviour.

However, Arjun tells him that he is not here to apologise nor does he think that there is something to apologise for if he says he wants to marry Preeta.

Preeta tells them all that she has been right about him and that he is not a good person.

However, Arjun tells her that he never asks her for a character certificate.

Kritika, Shrishti, Rishabh, Kareena and Rakhi all shame him for daring to speak for Preeta in this manner.

After a while, Rishabh calls security to have Arjun thrown out of the house.

However, Arjun tells Rishabh to not waste time by calling security.

Preeta asks the guard to not stand and tells them to throw Arjun out.

However, Arjun tells them that these guards will not listen to anyone but him because he has taken over the security agency they work for.

All the Luthras look shocked at this news.

Later, Arjun tells Preeta that he will prove her wrong and tells them upfront that he will take everything from Rishabh in the next seven days and those seven days will not be easy on them.

He warns them that he will take everything that Rishabh values and prides at.

© Copyright tellybest.com, 2022, 2023. All Rights Reserved. Unauthorized use and/or duplication of any material from tellybest.com without written permission is strictly prohibited.
Cached Saved on: Wednesday 25th of January 2023 08:47:18 AMCached Disp on: Wednesday 1st of February 2023 05:13:26 PM