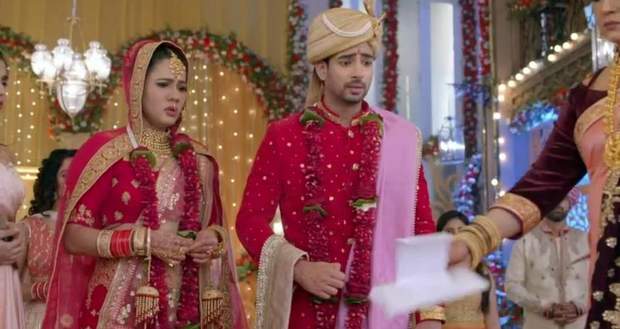 Preeta does the Gathbandhan ceremony reluctantly and side by side shows Akshay photographs of him, Kritika, and his child.

Preeta tells Akshay that she even has the DNA report of him and his child, a video of Megha fighting with Akshay that Megha will not remain with him as he is not breaking marriage with Kritika.

Preeta recalls her meeting with Ruchika in which she and Srishti make Ruchika realise that Akshay will leave everyone including her, his girlfriend Megha, Kritika, and go abroad after taking money of Kritika.

Preeta gives Akshay a countdown for telling the truth or she will tell the truth.

The marriage of Kritika and Akshay is about to start but Preeta interrupts to which Kritika says that not today Bhabhi, today is my marriage.

Preeta says it's very important as Akshay is not a good person and her life will get spoiled with him.

Peeta gives photographs and a DNA report to Kareena but Kareena throws them into the sacred fire.

Akshay shouts at Preeta that she doesn't want marriage to happen.

Akshay blackmails Kritika emotionally that he loves her but their marriage will not be successful as Preeta will keep on creating troubles in their happy married life.

Karan tells Akshay not to shout at his wife and side by side tells Preeta that he told her not to create any scene in the marriage.

Ruchika comes to Luthra's mansion but leaves not saying anything and without coming to anyone noticing.

Akshay taunts Karan that he and his wife are very good at doing drama.

© Copyright tellybest.com, 2020, 2021. All Rights Reserved. Unauthorized use and/or duplication of any material from tellybest.com without written permission is strictly prohibited.
Cached Saved on: Sunday 9th of May 2021 09:16:31 PM