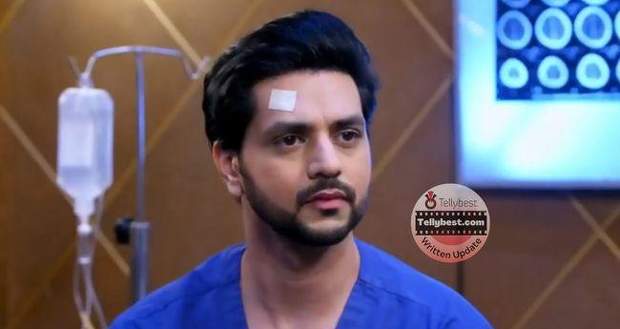 Meanwhile, Anjali stops Preeta as they were leaving and questions her about not heeding her warning.

Preeta tells Anjali that she is not after Arjun and she should stop thinking nonsense about her.

Shrishti tells Anjali to stop Arjun instead of blaming Preeta.

Anjali also tells Shrishti and Preeeta that their plan to take over Luthra's business is only delayed due to a plane hijack and snake bites but it is very much in progress.

Preeta looks at Anjali and tells her to think and do whatever she wants but if it hurt any of her family members then she will regret doing it.

She also tells Anjali that she use to think that Arjun is using her but now she needs to reconfigure her thinking as she thinks that Anjali is instigating Arjun and filling his mind with poison against her.

In the meantime, Mahesh and Kareena come looking for Rakhi but find Karan’s room empty and an album on the bed.

Mahesh also looks at the pictures and thinks of Arjun.

Meanwhile, Rakhi is at her temple thanking God for returning Karan to her. She tells God that she always had this feeling that Arjun is Karan but no one believed her.

Just then Girish comes to tell Rakhi that Preeta and the others have returned home.

Rakhi tells him to call Mahesh, Kareena and Dadi and Kritika to the hall as well.

In the meantime, Anjali comes to Arjun’s room complaining to him about being more concerned about Luthras and Preeta instead of her.

Arjun takes it lightly saying they have spent so much time together recently so it is possible that he asked for her.

However, Anjali’s jealousy has reached new heights as she tells him that he should be thinking of taking revenge on Luthras but what he is doing is the exact opposite.

Arjun’s head begins to pain and he recalls meeting with Rakhi and calling her Mom.

Later he thinks that he was dreaming and tells Anjali that he wishes it to be true and he can talk to his mother as he has stayed apart from her for a long time and now he just wants to rest in her lap.

Anjali gets irritated and tells him to change clothes so that they can go home.

Arjun once again asks about Rakhi while Anjali tells her that all the Luthras have gone home.

Meanwhile, everyone is gathered in the hall of Luthra's mansion where Rakhi tells them that Karan has returned.

Everyone is shocked to hear Rakhi.

Meanwhile, Arjun comes home where Snigdha’s Dadi welcomes him while Anjali remains upset with him.

Just then Arjun spots Rakhi’s suitcase at home and asks what is it doing here.

Anjali assumes that it got exchanged at the hospital.

Arjun decides to take away the bag to Rakhi with him.

In the meantime, Preeta asks Rakhi where is Karan.

Rakhi tells her that they have all met him but were not able to recognise him when he was here.

Kareena and Preeta ask Rakhi why has he not met them when he came here.

However, Rakhi tells them that Arjun is there Karan and has returned to them by God’s grace.

Meanwhile, a servant in the Luthra house looks shocked to hear the news.

© Copyright tellybest.com, 2022, 2023. All Rights Reserved. Unauthorized use and/or duplication of any material from tellybest.com without written permission is strictly prohibited.
Cached Saved on: Wednesday 25th of January 2023 10:24:42 AMCached Disp on: Thursday 9th of February 2023 05:13:28 AM