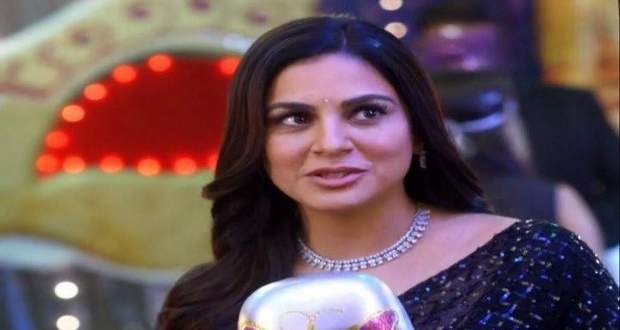 Rishabh tells her that after Karan gets back to normal then they will celebrate their anniversary with pomp.

Roxy tries to stop Natasha but she convinces her to kill Karan.

Meanwhile, Karan is at the dam while drinking and thinking about all the instances where he saw Preeta and Rishabh together.

Just then Natasha and Roxy arrive at the lakeside where Karan mistakes them for Rishabh and Preeta and starts accusing them of having an affair behind his back.

Elsewhere, Prithvi sees Preeta and Rishabh leaving the party and follows them.

Karan rebukes both of them for betraying him when Natasha suddenly pushes him off the dam.

However, Karan manages to hold onto the railing but Natasha starts kicking his leg to make him lose his grip.

Just then, Karan shouts Preeta's name and she hears it after which they both go towards the dam.

Meanwhile, some locals see Karan hanging and call the police while stating that the river contains alligators.

Natasha and Roxy run away thinking that Karan has fallen when in reality Karan has managed to hold onto the railing.

Before Rishabh can save him Karan falls into the water.

Prithvi gets shocked seeing everything and goes after Natasha to confront her.

Meanwhile, a servant gets the news about Karan falling into the river and informs the family.

The locals stop Preeta and Rishabh from going after Karan while the police and family arrive there.

On being blamed, Prithvi points at Natasha and Roxy. Later they all escape the police.

While trying to get out Karan gets bitten by a crocodile turning the water red.

Seeing the blood, everyone believes that Karan is eaten by alligators.

Sherlyn slaps Natasha for killing Karan while Roxy explains their plan to her.

Back at the Luthra mansion, the police inform the family that they have found a body from the river and request them to identify it.