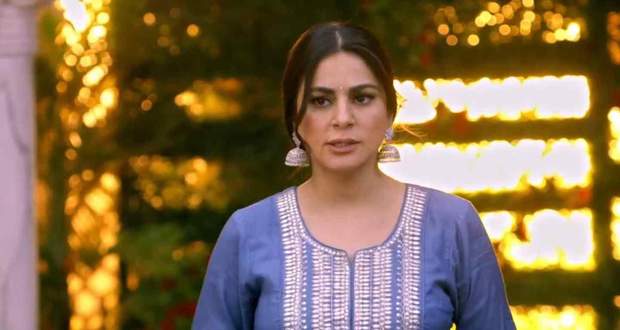 Today's Kundali Bhagya 9th May 2022 episode starts with Sherlyn coming down the stairs with the bag while Karishma spots her.

Sherlyn tells Karishma that Natasha is going back home as her mother has returned.

Waking on a deserted street, Natasha is thinking of ways to get back into Luthra's house when she feels someone’s presence behind her and rushes back to Luthra's mansion to protect herself.

In the parking, Shrishti, Preeta and Sameer are discussing the evidence and the best way to take it to the court.

Just then Preeta remembers Sandesh mentioning a hotel and makes a call to it.

The manager of the hotel informs Preeta about knowing something about Karan’s case and asks her to come in the morning.

Feeling excited, Preeta explains the plan to Sameer and Shrishti and assures them that once they have enough proof to implicate Prithvi then nothing and no one can save him.

Later, Sherlyn opens the door to find Preeta who silently goes to her room.

After a while, Natasha comes back to Luthra's mansion and begs Sherlyn to let her stay the night.

The next morning, Karan meets his family outside the court and is disappointed to find Preeta absent.

Sandesh denies meeting with Preeta but recognises Shrishti in the photo.

Prithvi immediately concludes Preeta’s whereabouts and rushes toward the hotel.

Preeta collects the evidence of footage and leaves for court.

On the other hand, Karan’s court proceedings begin and Karan misses Preeta.

Sherlyn looks for Natasha and gets weary thinking of Natasha’s making a video.