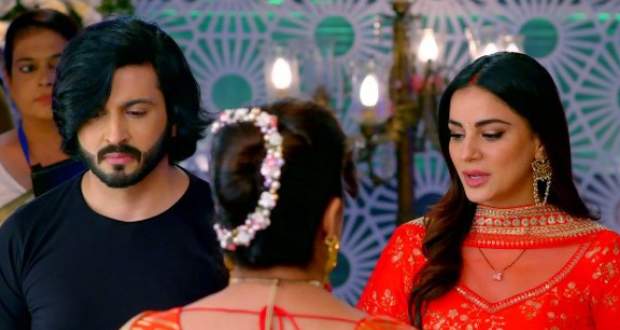 Preeta asks Mahira to put the Kumkum Thaal on the ground. Rakhi performs the Aarti rituals and welcomes Preeta and Karan inside the house. Meanwhile, Mahira gets out of control while Sherlyn tries to console her.

Sherlyn thinks Preeta’s entry is due to Mahira’s evil deeds. Mahira has plans and is adamant to throw Preeta out of the house the next day. Sherlyn asks her to act fast as it is a wedding night for Preeta and Karan.

Preeta stops Rakhi’s hands and reveals she wants to show her mother and sister her Grih Pravesh. Preeta video calls Srishti and assures her that she is fine.

The inspector also assures Sarla that Preeta will be fine. Rishabh takes the phone and offers to show Sarla the Grih Pravesh. Rakhi starts the rituals while Preeta enters the house by performing various rituals.

Rishabh declares that Karan and Preeta should take blessings from all the elders of the house. Rakhi gives blessings to Preeta and Karan to always remain together.

Later, Preeta goes to meet Mahesh and assures him that she will always protect him. She promises to protect and the whole family and seeks blessings from him. Later, she enters Karan’s room and feels a strong connection.

© Copyright tellybest.com, 2020, 2021. All Rights Reserved. Unauthorized use and/or duplication of any material from tellybest.com without written permission is strictly prohibited.
Cached Saved on: Thursday 15th of April 2021 08:28:31 PM