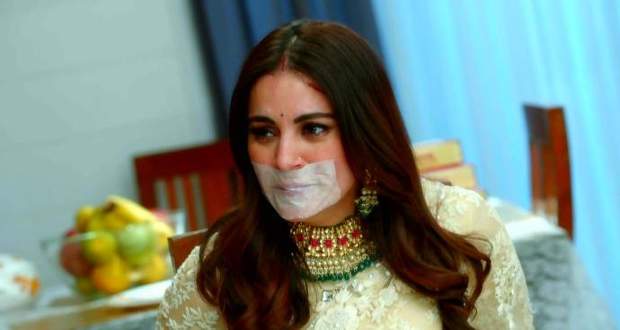 Today's Kundali Bhagya 13 Oct episode starts with Rakhi asking Mahesh to wake up as she needs him. Sherlyn comes there and tries to instigate her against Sarla.

Mahira continues to praise her own mother for handling situations effectively. However, Rakhi gets mad at Sherlyn and Mahira for talking against Sarla. Rakhi leaves as she is unable to spend some time peacefully with Mahesh.

Preeta and Srishti discuss Janki while Pawan is irritated as they have got the wrong Pandit. He orders his goons to tie Srishti and Preeta to a chair and put tape on their mouth.

Jani tries to hide under the table and secretly save Preeta. She continues to hide while the goon roams around the table. Meanwhile, Sarla is upset about Preeta while Rishabh tries to console her.

Sameer comes into the room and is confused about everything going on in the house. Elsewhere, Pawan asks the Pandit to perform the marriage using Mantras from the phone.

Prithvi wakes up from his slumber and is shocked to see Preeta tied to a chair. Prithvi gets disturbed to see her in that condition and wants to open her ropes. Pawan asks him to listen to him once before opening the ropes.

Mahira and Sherlyn argue over their plans and are scared about Mahesh getting cured. Meanwhile, Prithvi is happy that Pawan has brought Preeta to him while Pawan says Preeta loves only Karan.

Prithvi is misunderstood that Preeta loves him while Pawan offers to kill Karan. Prithvi is sure that Karan will lose as Preeta will get married to him now.