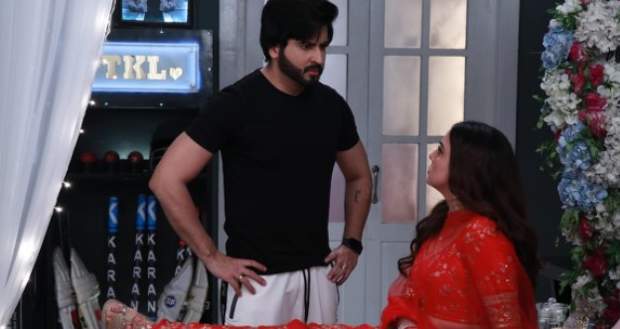 Today's Kundali Bhagya 14 Sep episode starts with Srishti threatening to expose his secret if he doesn’t send Karan in the room. Sameer wants her to do what he says if he sends Karan in his room.

Meanwhile, Dadi wants Karan to stay in the guest room while Rishabh wants her to go to his room. Kareena assures Karan that she will handle Preeta by hiring a lawyer.

Sameer comes at the same time and calls Karan a coward. He further hurts his ego by stating that he is afraid to face Preeta and tells him about Preeta insulting Karan in her conversation with Srishti.

Karan decides to go into his room while Kareena shouts at Sameer. Mahira tries to stop Karan but he rushes to the room. Sameer calls Srishti and reveals the tension will increase after his meddling.

Mahira gets upset with Karan going into his room while Sherlyn tries to console her. Later, Karan goes into his room and starts fighting with Preeta while Preeta doesn’t fight back.

She talks politely and later gets close to him. Karan is mesmerized and remembers their past romantic moments. Mahira witnesses the scene and wants to hurt Preeta with a lamp.

Karan asks Preeta to leave the room and she is about to leave when she finds Mahira and Sherlyn outside their room. She decides to upset Mahira and closes the door.

Mahira gets upset while Preeta compliments Karan for being nice. They again get close to each other while Mahira gets restless.

© Copyright tellybest.com, 2020, 2021. All Rights Reserved. Unauthorized use and/or duplication of any material from tellybest.com without written permission is strictly prohibited.
Cached Saved on: Saturday 23rd of January 2021 07:54:28 AM