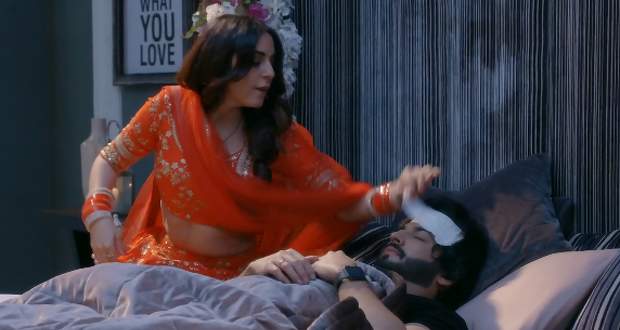 Today's Kundali Bhagya 16 Sep episode starts with Preeta deciding to sleep peacefully. Karan is thinking about Preeta’s attitude while at the same time, it starts raining.

Preeta gets worried about Karan and thinks he has a lot of attitude. Karan thinks Preeta is inhuman and starts acting when she comes to get him inside. Preeta decides to not open the window until he asks for it.

They continue to wait for each other’s first move while later Karan makes the first move. Meanwhile, Mahira is roaming in the house disturbed and locks Sameer in his room.

Preeta gets Karan inside and starts closing the windows. Karan helps her close one window and gets close to her. They both get wet and share some romantic moments.

Preeta asks Karan to remove his shirt or else she will while Mahira thinks they are spending their wedding night. Karan starts sneezing and asks Preeta to look away while he changes.

Later, Preeta wakes up to remove Karan’s pillow and finds he is sick. She gives him medicine and puts cold water strips on his head. Karan thanks her while Preeta stays awake to take care of him.

© Copyright tellybest.com, 2020, 2021. All Rights Reserved. Unauthorized use and/or duplication of any material from tellybest.com without written permission is strictly prohibited.
Cached Saved on: Saturday 23rd of January 2021 06:03:39 AM