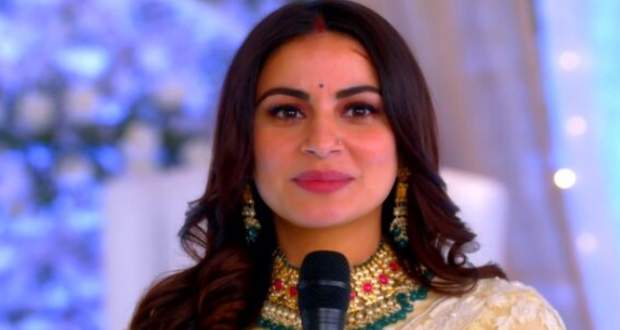 Today's Kundali Bhagya 20 Oct episode starts with Preeta saving the reputation of Luthra family. Mahira says she is not drunk while Preeta says they can come forward and smell her.

The guests support Preeta and rebuke Mahira for being a drunk. Mahira behaves rudely with everyone and makes fun of herself. Ramona and Sherlyn take her inside to save their reputation.

Sameer suggests Karan and Preeta should dance to a romantic song. Meanwhile, Mahira wants to tell everyone that Preeta spilled a drink on her while Romana and Sherlyn ask her to change.

Preeta and Karan start dancing and look into each other’s eyes romantically. Further, Preeta asks Karan if he was missing her while Karan says he is relieved to see her at the party.

Preeta is sure Karan was told she will never return while Karan trusts Preeta and knew she will be back. They both get into a cute banter while Sameer asks Srishti to dance with him.

Kareena is shocked to see them dancing while Sanjana warns her that the sister might also enter the Luthra house. Kareena doesn’t want Srishti in the house and is adamant to stop her.

Later, Sanjana learns that Pawan was involved in Preeta’s kidnap and rebukes Sherlyn for being involved with Prithvi or Pawan. Sanjana asks Sherlyn to leave Mahira while Ramona overhears it.

© Copyright tellybest.com, 2018, 2019, 2020. All Rights Reserved. Unauthorized use and/or duplication of this material without written permission from tellybest.com is strictly prohibited.
Cached Saved on: Thursday 26th of November 2020 10:14:45 AM