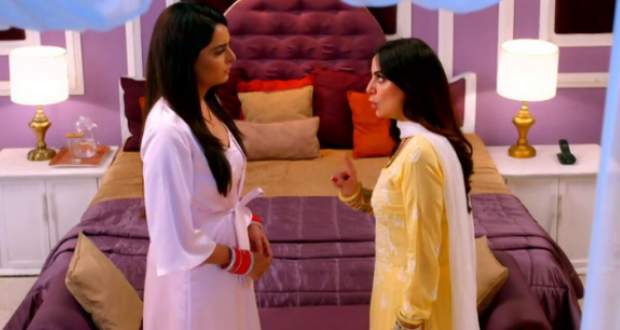 Today's Kundali Bhagya 21 Oct episode starts with Ramona praising Sanjana sarcastically while they both get into a fight. Sanjana tries to console Sherlyn and asks her to not support Mahira.

Mahira overhears this and gets upset. She leaves while Sherlyn follows her. Meanwhile, Preeta meets all the guests while Rishabh teases Karan for feeling something for Preeta.

Karan compliments Preeta’s eyes and says he gets mesmerized. The inspector asks Preeta about her wound and she lies. Preeta doesn’t want to tell anything about Mahira without any proof.

Preeta lies and says she was feeling suffocated around Mahira so went for a walk. Rakhi overhears this and announces that the next day there will be also a Mu Dikhai Rasam and another traditional Rasam for Preeta and Karan.

Mahira says that Karan has broken her heart while Karan asks her to not come between Preeta and him. Later, Sarla gives her blessings to Preeta and leaves.

Rishabh and Karan meet in Sameer’s room and discuss where Preeta went. Karan knows Preeta is hiding something as Mahira was lying about wearing Preeta’s dress.

At the same time, Sameer comes inside and Rishabh and Karan start interrogating him. However, he lies and says he doesn’t know anything. Elsewhere, Preeta learns Sherlyn knew about her kidnap and warns her of harming the Luthra family.

© Copyright tellybest.com, 2018, 2019, 2020. All Rights Reserved. Unauthorized use and/or duplication of this material without written permission from tellybest.com is strictly prohibited.
Cached Saved on: Tuesday 1st of December 2020 02:57:13 PM