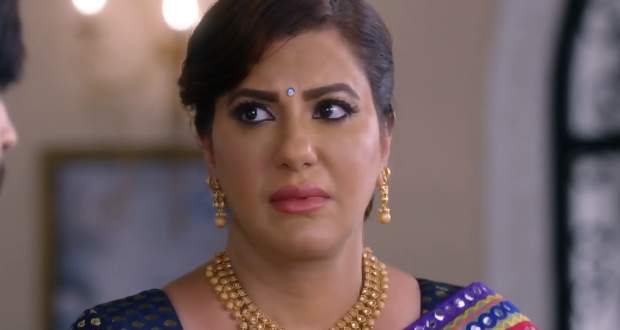 Today's Kundali Bhagya 22 Sep episode starts with Rakhi asking Girish to not give a cold drink to Karan. Rakhi wants to know about preparations while Karan gets to know about the reception.

Everybody in the house supports the decision of reception while Karan is upset. Later, Preeta takes her stuff from the guest room while Mahira starts following her.

She also asks Sherlyn to stay out of her way. Meanwhile, Karan thinks Preeta has mixed something in Gajjar Ka Halwa and that’s why everyone is praising her and organizing the reception.

Karan and Preeta fight for keeping their stuff in Almirah while Rakhi comes at the same time. She asks Karan to let Preeta keep her stuff in his cupboard.

Sherlyn calls Prithvi while he is in a terrible condition. He wishes to receive a call from Sarla instead of Sherlyn and further puts water on himself to get some relief.

Sherlyn reveals that Preeta is staying at their house as a daughter-in-law. Prithvi gets upset with her for not being able to throw her out of the house. Prithvi is further instigated when Sherlyn calls Preeta Karan’s official wife.

Rakhi finds Sherlyn in a terrible mood and questions her. Rakhi further wants Sherlyn to manage the function and perform all the rituals. Meanwhile, Sarla consoles Srishti by making Kheer for her.

Sarla receives a call from Rakhi who invites her for the wedding reception of Karan and Preeta. Srishti gets extremely excited to learn about the invitation.

© Copyright tellybest.com, 2018, 2019, 2020. All Rights Reserved. Unauthorized use and/or duplication of this material without written permission from tellybest.com is strictly prohibited.
Cached Saved on: Tuesday 1st of December 2020 10:55:55 AM