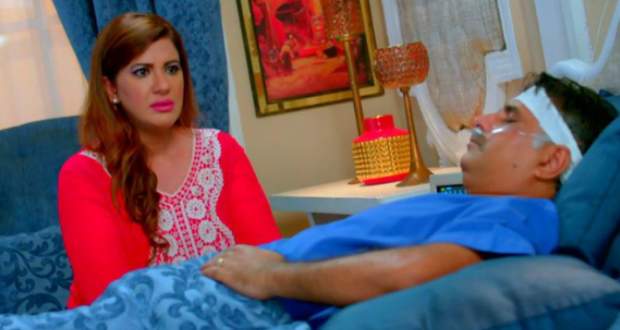 Today's Kundali Bhagya 22 Oct episode starts with Sherlyn telling Preeta that she is not related to her. Preeta confronts Sherlyn that Janki has seen her in Prithvi’s arms.

She reveals that she knows they both tried to kill Janki. Sherlyn gets shocked to learn that Janki has regained her memory. Sherlyn says that she just had a fling with Prithvi and some other boys.

Sherlyn says no one will believe her while Preeta says she has proof and witness against her. Sherlyn gets scared that Preeta might actually tell everyone. Elsewhere, Sarla is worried about Srishti as she might get trapped because of Luthra's house.

She also thinks Preeta might not be able to handle things as she is busy with her problems. Elsewhere, Rakhi remembers Sarla’s words and is guilty that she didn’t handle the situation.

She thinks she should support Preeta as a daughter-in-law and asks for Mahesh’s support. Rakhi also wants to get justice for Preeta as she thinks Preeta was in danger.

She decides to go and tell Mahira that she has to leave Luthra's house. Meanwhile, Karan and Preeta get into a cute banter and fight over the temperature of the room.

They blame each other for always fighting and fight for the remote of the AC. While fighting they get close to each other and spend some romantic moments looking into each other’s eyes.

© Copyright tellybest.com, 2018, 2019, 2020. All Rights Reserved. Unauthorized use and/or duplication of this material without written permission from tellybest.com is strictly prohibited.
Cached Saved on: Saturday 28th of November 2020 03:54:35 AM