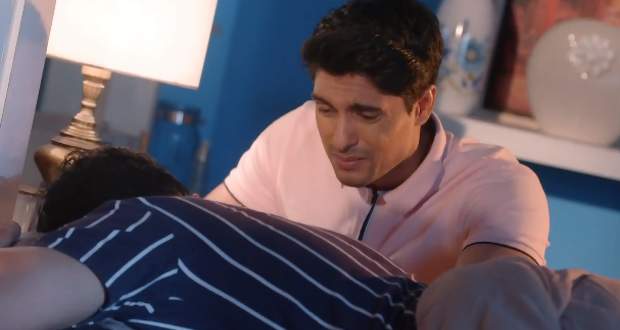 Today's Kundali Bhagya 24 Sep episode starts with Preeta feeling dizzy in the kitchen. Meanwhile, Rishabh gets upset with Sherlyn for acting all sweet in front of Karan.

Sherlyn tries to get close to Rishabh to stop his questions. Elsewhere, Prithvi’s brother arrives home and asks about his brother. Pawan goes into the room and tries to wake Prithvi up.

He picks up Mahira’s phone and learns that she is ready to help Prithvi get his love, Preeta. Pawan assures Mahira that he will do what his brother never did. He calls himself Ravan and plans to abduct Sita of his brother.

Kareena is upset with Preeta’s presence while Rakhi decides to talk to her. Rakhi asks Preeta to act as if everything is fine in front of society to save their family reputation.

Preeta promises to not do anything to spoil the family image. Later, Karan and Preeta get into cute Nok-Khok while Mahira plans to reveal herself as the real daughter-in-law of the family.

Ramona decides to leave the Luthra house but Rakhi and Kareena convince her to stay for the reception. Elsewhere, Preeta gets ready and later finds Mahira in her room wearing the same clothes and jewelry. She is also wearing Sindoor in her head.

Mahira mocks Preeta and dreams of taking her place as Karan’s bride.