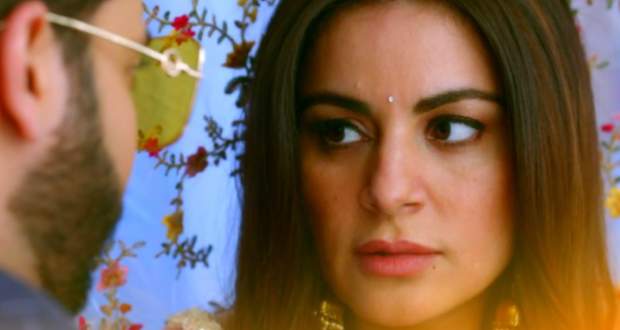 Today's Kundali Bhagya 29 Oct episode starts with Nimmi saying that Preeta is perfect for Karan. Karan feels happy to overhear Preea being praised and is confused.

Sarla is suffering from fever but wants someone to go to Preeta’s Mu Dikhai. Srishti refuses to go and video calls Preeta.

Preeta asks Srishti to get the checkup done and asks Sarla to take a rest. Preeta feels bad that no one will be there from her family while Sameer says he will give updates to them.

Sherlyn is worried about Preeta’s declaration while Sanjana learns Mahira also left the house. Sherlyn shares her worries with her mother.

Sanjana gets worried that Sherlyn might be thrown out of Luthra's house as well. Sherlyn blames her mother for not doing anything for her.

Sanjana decides to do something for her daughter and decides to spoil Preeta’s image. Meanwhile, Dadi and Kareena greet the guests while Kareena is not pleased to see Nimmi.

They both have some old issues from the time of Rakhi’s wedding and greet each other with fake smiles.

The Mu Dikhai ritual start and Karan and Preeta come downstairs. Rano suggests that Karan should start the ritual.

Nimmi asks Karan to give a gift to Preeta during the ritual. Rakhi gives a gift to Karan to present in front of Preeta.

Karan enters the Ghunghat and wishes to talk to Preeta while everyone is surprised. Karan wants to know what magic is used by Preeta as he has also started caring for her.

Everyone starts talking about Karan’s behavior while Karan gives the ring to Preeta.

© Copyright tellybest.com, 2018, 2019, 2020. All Rights Reserved. Unauthorized use and/or duplication of this material without written permission from tellybest.com is strictly prohibited.
Cached Saved on: Monday 30th of November 2020 11:28:30 PM