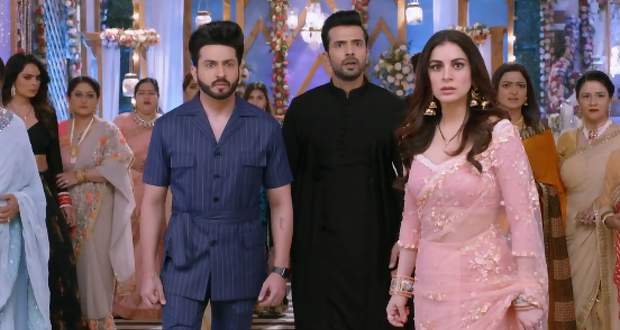 Today's Kundali Bhagya 30 Oct episode starts with Nimmi asking Karan to come out of the Ghunghat. He follows the orders while Nimmi complements Karan and Preeta.

Further, the ring finding game starts and many family members take Preeta’s side. Sherlyn asks her mother to do something.

Sanjana says she has called some people and soon there will be a drama. The ring finding ritual starts and Karan and Preeta both hold the ring in the first attempt.

The second time Preeta finds the ring while Karan wishes to play another game. He uses a ball and suggests balancing it from one point to another without touching.

Karan and Preeta keep the ball between them and the ball fall because of Karan. Preeta again wins while Karan fails as he is mesmerized by Preeta’s beauty.

Karan starts weeping while Preeta offers to get the ball. She approaches the door and finds Mahira with her wrists slit.

Blood pours down her hands and everyone is shocked to see her. She states that she is Karan’s wife and puts blood on her hairline.

Sameer tells Srishti about Mahira’s suicide attempt while Srishti decides not to tell Janki or Sarla.

© Copyright tellybest.com, 2018, 2019, 2020. All Rights Reserved. Unauthorized use and/or duplication of this material without written permission from tellybest.com is strictly prohibited.
Cached Saved on: Thursday 26th of November 2020 09:18:12 AM