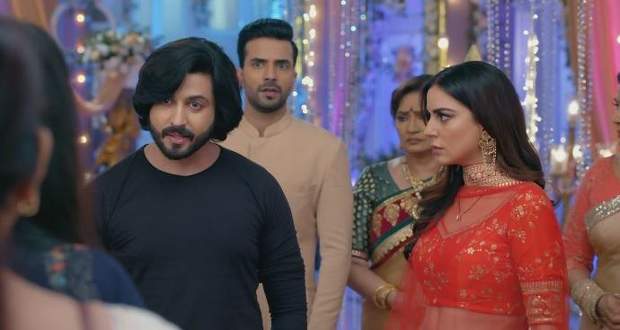 Today's Kundali Bhagya 4 Sep episode starts with Preeta calling Mahira her Sautan. Karan asks Preeta to not misbehave with Mahira while the NGO calls him out on it.

Rishabh says that Karan and Preeta have got married to each other while Sherlyn tries to manipulate his words. Preeta asks Karan if he married her or not.

Karan doesn’t let anyone else talk and asks Preeta to leave. He further threatens the consequences if she doesn’t leave. Preeta refuses to leave while Karan calls the police.

Rakhi feels disappointed in Preeta for causing trouble for their family while Ramona taunts her for always trusting Preeta. Kareena calls Rakhi innocent and that Preeta has always taken advantage of it.

Ramona apologizes for her behavior while Rakhi feels guilty for trusting Preeta. Kareena states that Karan should not have married Preeta in the first place.

Meanwhile, Sarla is happy that Preeta didn’t marry Prithvi and is finally able to see his true face. She states that Karan is way better than him as he shows his true colors always.

Srishti throws Prithvi out of the house while he again enters the house. He states that he hates them and threatens to make their life hell. Prithvi starts searching for Preeta in the house while Janki hits him with a flowerpot.

Sarla tells him that Preeta has gone to Luthra house and threatens to call the police. Elsewhere, the Luthra family discusses Preeta’s actions and is upset with her.

Sherlyn sees Prithvi and leaves to stop him while Rishabh tries talking to Karan. Rishabh is fed up with everyone in the house while Preeta gets the support from NGO women.