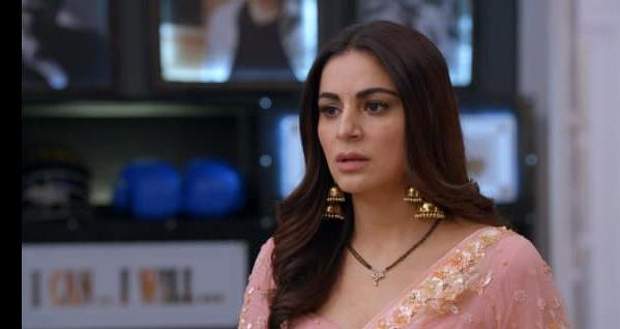 Today's Kundali Bhagya 5 Nov episode starts with Karan taking Mahira and others home. He reveals that Rakhi will come along with Rishabh. Mahira doesn’t let Kritika sit in the front seat.

Kritika feels strange and realizes something bad might happen. Meanwhile, Srishti and Sameer are able to talk to the doctor and learn Mahira’s attempt was fake.

The doctor says Mahira was just trying to get the attention of the family. Mahira returns to Luthra house and stands on the main gate.

She shares her pain of getting away from the family and states she was insulted the last time. She suggests that she should be given proper welcome in the Luthra family.

She wants a proper Grah Pravesh ritual as she is married to Karan. Elsewhere, Preeta gets shocked to learn that Mahira has returned to Luthra house.

Rakhi says they can’t perform the rituals as she is not the daughter-in-law. Kareena orders Sherlyn and Kritika to bring the things needed for Grah Pravesh.

Rakhi wishes to talk to Dadi alone while Sherlyn is impressed with Mahira’s act. Meanwhile, Preeta wants Karan to send Mahira to her mother.

Preeta blames Mahira for their fight and tries to make Karan realize Mahira is a big problem. Mahira has made a plan to get Preeta out of the Luthra house.

Preeta tries to make Karan understand that Mahira’s presence will affect the whole family. The strong winds cause the Kumkum Thaal to fall off Sherlyn’s hands.

Sanjana calls Sherlyn and reveals the next half hour is crucial. She wants her to not let anyone inside the house for the next half an hour as it will be dangerous.

© Copyright tellybest.com, 2020, 2021. All Rights Reserved. Unauthorized use and/or duplication of any material from tellybest.com without written permission is strictly prohibited.
Cached Saved on: Sunday 9th of May 2021 10:37:37 PM