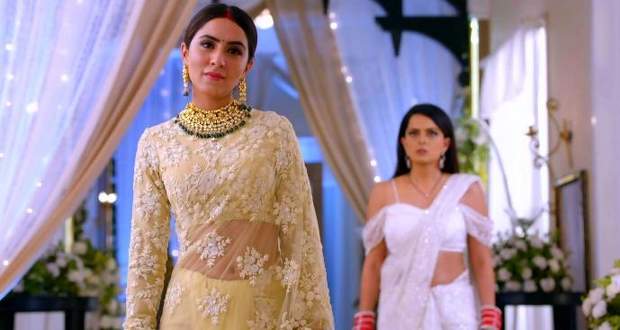 Today's Kundali Bhagya 5 Oct episode starts with Pawan revealing that Prithvi snatches the one he loves. Preeta gets angry and reveals he is the wife of Karan showing the Sindoor and Mangalsutra.

Pawan suggests that he should get Prithvi and Preeta married. He orders his goons to get Prithvi ready and make him wear the same clothes he wore during the previous wedding.

He asks her to get ready while Preeta raises her hand. Meanwhile, Sherlyn confronts Mahira and warns her of the consequences of her actions. Ramona also comes there and questions her while Mahira thinks she is doing the right thing.

Janki sees from the window that the goon is pointing a gun at Preeta. She learns that Pawan is getting Preeta married to Prithvi and decides to save her.

Sherlyn gets shocked to learn that Pawan kidnapped Preeta. Sherlyn slaps Mahira and rebukes her for her actions. She says that Pawan is very dangerous and will kill everyone who will come in his way.

Janki tries to call Karan and then later messages Srishti to inform her. A goon tries to make Janki unconscious but she puts chloroform on his face instead. Elsewhere, Sherlyn calls Prithvi’s mother and asks her to stop Pawan.

Prithvi’s mother refuses to help her while Sherlyn is adamant to stop the wedding of Preeta with Prithvi. Later, Preeta tries to fight Pawan and Janki also attacks Pawan and slaps him.

One on the goons puts chloroform on Janki’s face and Pawan stops Preeta. Meanwhile, Ramona is instigated by Sanjana and decides to make Mahira the Bahu of the Luthra family.

Sarla wonders where Srishti and Janki went and gets confused to see the bride hugging Ramona as she thinks it is Preeta. Kareena also witnesses the scene and is shocked.

© Copyright tellybest.com, 2018, 2019, 2020. All Rights Reserved. Unauthorized use and/or duplication of this material without written permission from tellybest.com is strictly prohibited.
Cached Saved on: Tuesday 24th of November 2020 01:10:38 AM