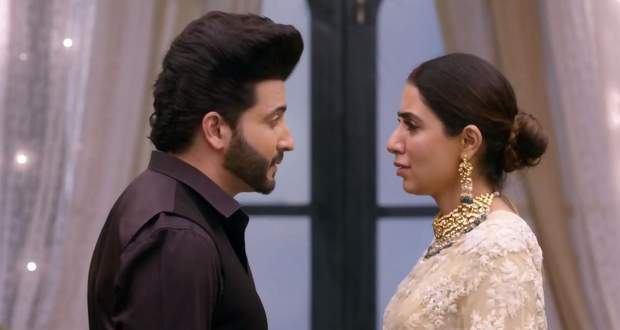 Today's Kundali Bhagya 6 Oct episode starts with Ramona asking Karan to have a dance performance with his wife. Mahira comes at Preeta’s place with her face covered and starts dancing with Karan.

Mahira flirts with Karan, while Karan asks her to not to flirt in front of everyone. Mahira reveals her name and Karan pushes her away.

Mahira runs away from the reception party and Karan follows her, while everyone assumes that Preeta might have said something wrong to Karan.

Karan questions Mahira about what is she trying to do on wearing Preeta’s dress. Mahira answers him it is their reception party and asks him to inform everyone about her.

Karan says to Mahira that she is doing wrong whereas Mahira tells him that it was Preeta who did wrong with her.

Meanwhile, Sherlyn decides to stop Prithvi’s wedding with Preeta but Rishab arrives and asks her to get back in the house.

Karan tells Mahira that Preeta is his wife, while Mahira shouts at him in stress. Karan says her that he is not in love with Mahira but she asks him to accept her as his wife.

Karan tells Mahira that she is insulting herself by using Preeta’s identity to enter his life and informs her that he is going to search for Preeta.

Srishti meets with an accident while travelling in an auto-rickshaw. Elsewhere, Pawan ties down Preeta with a rope to forcefully get her to marry Prithvi.

© Copyright tellybest.com, 2018, 2019, 2020. All Rights Reserved. Unauthorized use and/or duplication of this material without written permission from tellybest.com is strictly prohibited.
Cached Saved on: Thursday 3rd of December 2020 06:37:21 PM