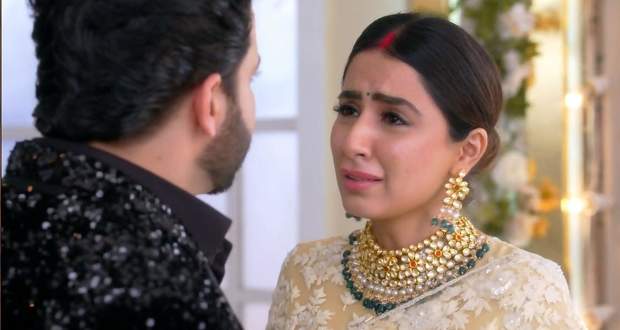 Today's Kundali Bhagya 6 Oct episode starts with Janki regains consciousness and gets shocked to see Prithwi in an unconscious state. She prays to God to help her in saving Preeta’s life.

Karan tries to call Preeta but she doesn’t pick his call, while Mahira informs Karan that Preeta has left him and his family.

Karan takes a stand for Preeta and says that Preeta cannot go against her family. Mahira tells him that she wore Preeta’s dress to not to let Luthra’s to lose their reputation in front of the guests.

Meanwhile, Preeta tells Pawan that Mahira is trying to trap both of them. Pawan doesn’t believe her and asks the priest to start the marriage rituals.

Mahira asks Karan to have a look at Preeta’s letter and gives him false information that Preeta has left him and went to marry Prithwi.

Karan says to Mahira that he doesn’t want to marry her and that he is not in love with her. Sherlyn stops Mahira from following Karan and asks her to handle the situation carefully.

Further, Sherlyn offers a drink to Mahira, while Mahira says that Karan insulted her and rejected her love for him.

Mahira tries to relax by getting a drink, while Karan recalls Mahira’s words that Preeta left him to marry Prithwi.

He hugs Rishab and tells him that he will share everything after the reception party. Meanwhile, Mahira gets a glass of drink in front everyone and they assume her to be Preeta.