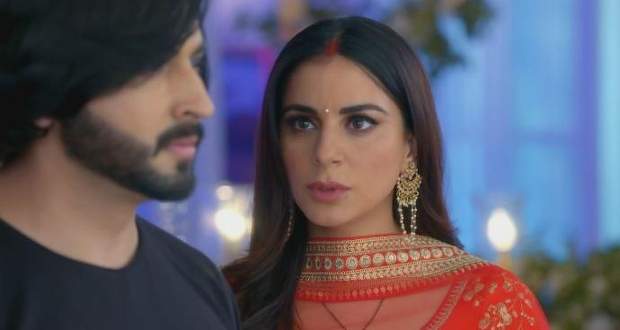 Prithvi wants Sherlyn to always support him and wants her help. He wants her to throw Preeta out of the house while Sherlyn wants to know why he is frustrated.

Prithvi wants the Arora family to realize his importance while Sherlyn asks him to leave. The police arrive at the Luthra house and ask for Karan Luthra.

The female police officer turns out to be Karan’s fan and can’t control her happiness. Instead of talking about the case, the officer asks for a selfie with Karan.

The officer comes to the point while Mahira explains that Preeta is falsely claiming to be Karan’s wife. Karan accuses Preeta of causing his father’s accident along with Prithvi.

He further accuses Preeta pushing Mahesh Luthra again off the stairs. He also mentions that Preeta also kidnapped Rishabh. He asks police to arrest Preeta for an attempt to murder and kidnapping.

Preeta tries to prove her innocence and tells the police that he disguised as the groom and married her. Preeta also mentions that Rakhi was present at their first wedding.

Karan again asks police to arrest Preeta while Sherlyn and Mahira want a proof that Karan married Preeta. Sherlyn lies that they were having a get-together and everyone in the family supports her.

Preeta states that she has a video as proof of her wedding with Karan. The inspector sees the video and state Preeta is the legal wife of Karan. The police threaten to arrest them if they throw Preeta out of the house.

The police further ask for proof from Karan that Preeta kidnapped Prithvi or tries to kill his father. Rishabh states that Preeta didn’t kidnap him.