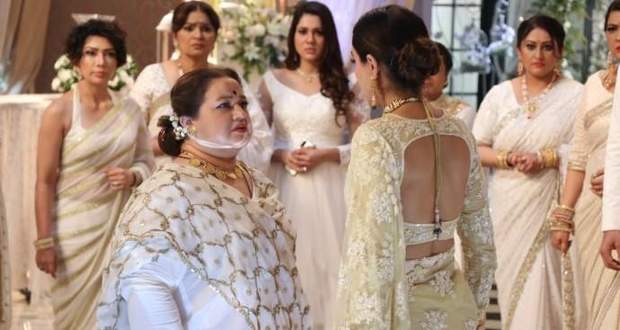 Today's Kundali Bhagya 8 Oct episode starts with Mahira drinking alcohol while everyone wonders what Preeta is doing. Kareena wishes to slap Preeta while Romana stops her.

Rakhi criticizes Preeta’s act in front of Sarla. Sarla is sure that the girl under the Ghunghat is not Preeta. Mahira gets drunk and removes her Ghunghat. She further starts dancing seductively while everyone is shocked.

Karan pushes Mahira away while Mahira is drunk and introduces herself as Karan’s wife. Sarla questions Mahira about Preeta while Mahira continues to talk about her marriage.

Rishabh diverts all the guests to the dining area. Meanwhile, Srishti wakes up in a hospital and rushes to save her sister. Meanwhile, Preeta has still stuck at Pawan’s house and wonders if everyone at Luthra house knows the truth.

Mahira is not in her senses while Rishabh wants to know where is Preeta. Sarla takes stand for Preeta and also rebukes Sherlyn for talking unnecessarily.

Sherlyn and Sarla get into an argument while Sarla tries to expose Sherlyn and Mahira. Mahira loses control and wants her rights. Mahira questions if Preeta is such a nice girl then why she is not present there.

Mahira says that Preeta has eloped with Prithvi. Sarla slaps Mahira for talking against Preeta. Meanwhile, Srishti reaches Pawan’s house and sneaks into the house.

© Copyright tellybest.com, 2018, 2019, 2020. All Rights Reserved. Unauthorized use and/or duplication of this material without written permission from tellybest.com is strictly prohibited.
Cached Saved on: Saturday 28th of November 2020 03:57:03 AM