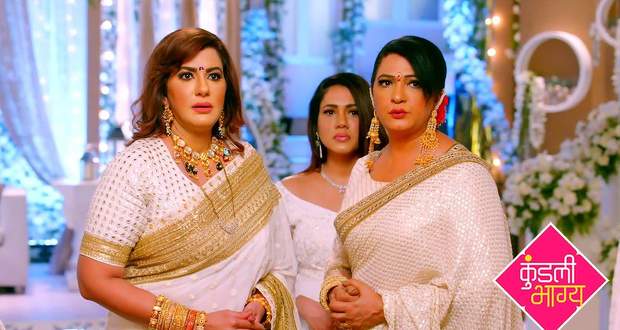 Today's Kundali Bhagya 9 Oct episode starts with Sarla accusing Karan of marrying Preeta secretly as well. She proves that Preeta has not done anything wrong.

Sarla asks the Luthra family to accept Preeta as their daughter-in-law as they are otherwise following all rituals. Mahira again speaks up for herself and Karan’s relationship.

Sarla and Mahira again start arguing while Sarla has expectations from Karan. Karan is upset as Preeta is not present there while Mahira reads the fake letter left by Preeta.

She has written that letter on behalf of Preeta and instigates Karan against Preeta. Mahira proves herself innocent by lying that she came dressed as Preeta to save family reputation.

The Luthra family takes Mahira’s side and continue to oppose Preeta. Meanwhile, the Pandit tells Preeta that he is not a marriage Pandit and doesn’t know how to perform a wedding.

Pandit reveals that Pawan will kill him if he speaks up. Elsewhere, Janki and Pawan get into an argument over Prithvi getting married to Preeta. Pawan brings Prithvi outside while Preeta tries to delay the wedding by asking him to bring Prithvi in his senses.

Mahira gets upset as Karan trusts Preeta and knows she has not eloped with anyone. Sarla denies accepting the letter as the handwriting doesn’t match Preeta’s handwriting. Meanwhile, Preeta tries to burn her ropes while Srishti decides to help her.