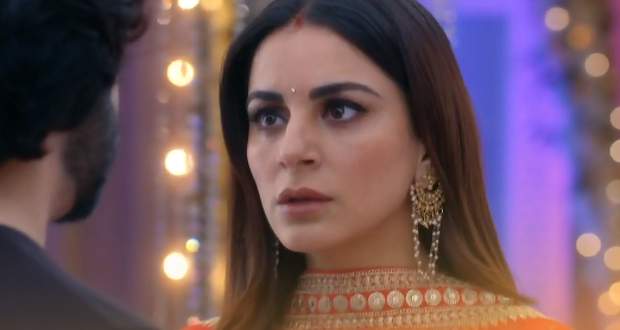 Today's Kundali Bhagya 9 Sep episode starts with The police and NGO women giving blessings to Karan and Preeta. Mahira waits for the police to leave while the inspector wants to perform the Grah Pravesh ritual.

Karan says they don’t perform that ritual while Rishabh suggests the opposite. The inspector asks Rakhi and Kareena to prepare for the rituals and ask Sherlyn to prepare Karan’s room.

The inspector wants to see the room while Sherlyn goes to prepare the room. Meanwhile, Sarla gets restless to think about Preeta being in Luthra house all alone.

Srishti tries to console her and states Preeta is strong. Elsewhere, Rakhi is stressed and disappointed with Preeta’s actions. She is upset that Preeta didn’t think about their reputation.

Kareena asks Rakhi to not trust Preeta ever again. Later, Sherlyn is decorating Preeta and Karan’s room while Mahira is upset with her situation. The constable forces Mahira to put rose petals on the bed.

She decides to put rose stems full of forks also on the bed. Sameer thinks about talking to Srishti while at the same time, Girish comes to take Daadi for the Greh Pravesh.

Preeta goes outside to enter with all the rituals while Karan wants to expose Preeta’s true face. Rishabh tries to defend Preeta but Karan still hates her.

The constable witnesses Mahira’s actions and asks her to remove the bedsheet. The constable asks Sherlyn to also move out. Later, Preeta wants Karan to do Grah Pravesh with her while Karan refuses to oblige. The inspector orders to arrest Karan.