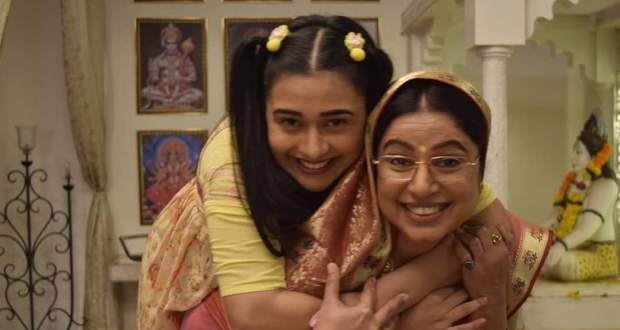 Today's Kya Haal 12 Jan episode starts with Kanhaiya giving money to the traffic policeman and tells him to give him a ticket. He does it to teach his daughter a lesson.

Pratibha tells Kunti Devi that they must lead by example.

Prema stands by the meter box and turns off the connection.

The girls talk among themselves. They try to figure out who is responsible for no electricity in their house. Panjiri says that they will wait for the light to come in the correct way. Prarthana says that it is right to do things the correct way.

At eight, Prema turns on the connection.

Pratibha gives money to the kids to bribe the school guard. The girls refuse and return the money showing that they have learnt the lesson.

Kanhaiya calls for help. Prema slips on the floor and falls into Kanhaiya’s arms. Kunti Devi sees them together.

The girls enjoy their day off. Surili tells the girls that the water maybe supplied anytime in their society. They brainstorm that Kunti Devi has to bribe the officer so would she do that.

Upcoming Kya Haal Panchal episode update: The official tells Kunti that she has to pay him to fix the water pipe otherwise it will be fixed after a month.

© Copyright tellybest.com, 2022, 2023. All Rights Reserved. Unauthorized use and/or duplication of any material from tellybest.com without written permission is strictly prohibited.
Cached Saved on: Wednesday 25th of January 2023 06:01:47 PMCached Disp on: Thursday 2nd of February 2023 07:58:31 PM