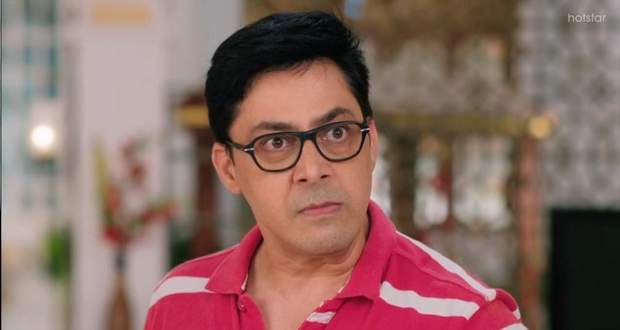 Today's Lockdown Ki Love Story 10 Sep episode starts with Dhruv and Sonam getting into an argument. Dhruv pushes Sonam and she gets bashed into the glass table.

Dhruv rushes to see Sonam, while Pratap orders Dhruv to stay away from Sonam. Shashikant asks his Dheeraj to help Sonam but Sheetal orders him not to touch her would-be sister-in-law.

Sonam’s family decides to take Sonam to the hospital. Dheeraj informs Pratap that Ankita will bandage Sonam’s wound. Pratap gets angry at Dhruv’s family for being so careless, while Dhruv makes a call to his friend to bring the doctor to his house immediately.

Meanwhile, Dhruv’s family and Sonam’s family get into an argument on providing the treatment to Sonam. Dhruv arrives there and shouts at everyone for fighting with each other.

Dhruv’s friend arrives with the doctor, while the doctor does the treatment of Sonam. Pratap scolds Dhruv for being the reason for Sonam’s accident.

Later, Nutan goes to Dhruv’s room and Dhruv shares his feelings with her. He tells her that he didn’t injure Sonam intentionally. Nutan consoles Dhruv and tells him that she knows that it was just an accident.

Nutan questions Sheetal about her involvement in Sonam’s accident, while Sheetal reveals that she made Sonam fall down. Nutan scolds Sheetal for hurting Sonam and tells her that she doesn’t want to break Dhruv’s heart.

Sonam’s mother gets upset about overhearing Nutan and Sheetal’s conversation. In the morning, Dhruv sits beside the unconscious Sonam, while his friends arrive there and question him about his bad mood.

Dhruv shares his feelings with them, while Sonam gains consciousness. Pratap arrives there and calls everyone to see Sonam. Pratap informs Sonam that he has made all the arrangements to leave for Mumbai. Dhruv asks Pratap to believe him that he didn’t hurt Sonam.

Nutan asks Pratap to not to blame Dhruv as he is innocent. Sonam’s mother questions Nutan about Sonam’s accident, while Sonam informs everyone that Dhruv didn’t push her.