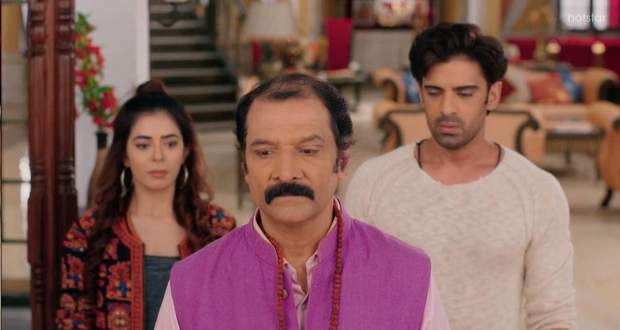 Sonam rushes to the kitchen and questions Sheetal about her intention to hurt her. Sheetal disagrees to Sonam, while Sonam intentionally makes Nutan and Sheetal fall down.

Subhadra daydreams everything and drops her plan to inform Sonam anything about Sheetal. Dhruv arrives there to change Sonam’s bandage.

Sonam requests Dhruv to apologize to his parents and then come to her to change her bandage. Sonam tells Dhruv that he misbehaved with his parents without any reason.

Later, Dhruv tells his father that he loves and respects him a lot. He apologizes to his parents for misbehaving with both of them.

Dhruv’s friend advises Shashikant to beat Dhruv with a slipper to teach him a lesson. Sonam asks Shashikant to forgive Dhruv and informs him that she will also follow all the cultures.

Shashikant gets a video message and he wears the earphones to listen to it. He gets to know that Nutan and Sheetal have planned to break the Dhruv relationship with Sonam.

Shashikant stares at Nutan and tells everyone that he has forgiven Dhruv and he wants to end the matter right there.

Meanwhile, Shubhadra asks Tanu if she feels that Ankita is not happy with her family. She informs Tanu and Sonam that Sheetal intentionally made Sonam fall down.

Sonam goes to Sheetal’s room and hugs Sheetal to ask her about her accident. Sonam asks Sheetal about the reason to get her injured.

Sheetal informs Sonam that she didn’t fall her down but she was trying to hold her. Sonam pulls Sheetal towards the bed and asks her to change her bandage. She tells her mother that Sheetal with change her bandage every day.

© Copyright tellybest.com, 2020, 2021. All Rights Reserved. Unauthorized use and/or duplication of any material from tellybest.com without written permission is strictly prohibited.
Cached Saved on: Thursday 28th of January 2021 06:33:42 AM